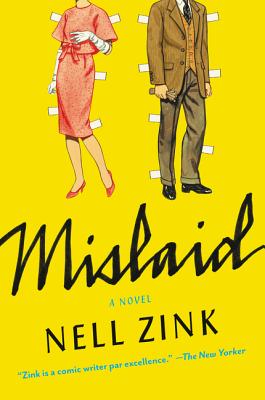 LONGLISTED FOR THE 2015 NATIONAL BOOK AWARD

A sharply observed, mordantly funny, and startlingly original novel from an exciting, unconventional new voice—the author of the acclaimed The Wallcreeper—about the making and unmaking of the American family that lays bare all of our assumptions about race and racism, sexuality and desire.

Stillwater College in Virginia, 1966. Freshman Peggy, an ingénue with literary pretensions, falls under the spell of Lee, a blue-blooded poet and professor, and they begin an ill-advised affair that results in an unplanned pregnancy and marriage. The two are mismatched from the start—she’s a lesbian, he’s gay—but it takes a decade of emotional erosion before Peggy runs off with their three-year-old daughter, leaving their nine-year-old son behind.

Worried that Lee will have her committed for her erratic behavior, Peggy goes underground, adopting an African American persona for her and her daughter. They squat in a house in an African-American settlement, eventually moving to a housing project where no one questions their true racial identities. As Peggy and Lee’s children grow up, they must contend with diverse emotional issues: Byrdie deals with his father’s compulsive honesty; while Karen struggles with her mother’s lies—she knows neither her real age, nor that she is “white,” nor that she has any other family.

Years later, a minority scholarship lands Karen at the University of Virginia, where Byrdie is in his senior year. Eventually the long lost siblings will meet, setting off a series of misunderstandings and culminating in a comedic finale worthy of Shakespeare.

“There’s nothing derivative about Nell Zink’s hip, hilarious and unexpectedly moving novel Mislaid… Zink has a genius for making the bizarre seem natural… makes for one of the most satisfying happy endings in recent fiction.”
— Wall Street Journal

“The novel’s charm and intelligence run deep. It’s a provocative masquerade with heart, not just an exercise in role reversals, reminding us that the gaps and cracks between our insides and our outsides are the spaces where our spirits live.”
— New York Times Book Review

“A writer of extraordinary talent and range. Her work insistently raises the possibility that the world is larger and stranger than the world you think you know. You might not want to believe this, but her sentences and stories are so strong and convincing that you’ll have no choice.”
— Jonathan Franzen

“Zink’s capacity for inventions is immense… [Mislaid] zips along with a giddy, lunatic momentum. It’s perverse wackiness is irresistible; unlike just about everything engineered to make you laugh out loud, Zink’s novel actually does, over and over again… She knows how to let her freak flag fly.”
— Bookforum

“Zink’s energy pulses in narration. [She] is original, unsentimental, erudite, and something of a naturalist. Her vocabulary is tremendous [and] her sentences are penetrating and agile.”
— Harper's Magazine

“[Zink] further proves her narrative chops as she spins a darkly satirical story … Zink’s frankness on topics like gender, racial, socioeconomic, and sexual identity politics is refreshing and bold, but it is her strong writing and lucid sentences which truly reel readers in-and keep them there.”
— L Magazine

“[Zink] makes her big publishing debut with with this unconventional but ultimately brilliant novel that takes family, race, and the how decisions you make could resonate for years to come.”
— Men’s Journal

“A startlingly original novel about the dissolution of an eccentric American family.”
— Harper's Bazaar

“Nell Zink’s The Wallcreeper was the most impressive debut of 2014…her second novel, the hilarious and genius Mislaid, which restores a kind of Whitmania to American fiction, by which I mean that it convincingly covers race, class, gender, and sexuality in the briefest of spaces with the sharpest of minds..”
— Flavorwire

“A deceptively slim epic of family life that rivals a Greek tragedy in drama and wisdom…deftly handles race, sexuality, and coming of age. Zink’s insight is beautifully braided into understated prose that never lets the tension subside… it all points to Zink’s masterly subtlety and depth.”
— Publishers Weekly (starred review)

“Zink’s capacity for inventions is immense… [Mislaid] zips along with a giddy, lunatic momentum. It’s perverse wackiness is irresistible; unlike just about everything engineered to make you laugh out loud, Zink’s novel actually does, over and over again… She knows how to let her freak flag fly.”
— BookForum

A high comedy of racial identity...Zink is a comic writer par excellence...Both that voice and the stories Zink tells are so startling, so seemingly without antecedent, that she would seem like an outsider artist, if she did not betray so much casual erudition.”
— New Yorker

“Mislaid is a sprawling multi-generational saga of a Southern family that is as absurd and hilarious as it is tragic and seeing.”
— VanityFair.com

“The title of Nell Zink’s new novel is just the first wry, indecorous joke in this zany-brainy story...Zink writes with such faux innocence that her cracks about sexuality and race detonate only after she has riffed off to the next unlikely incident.”
— Washington Post

“Delightfully odd…Mislaid’s pathos is charmingly funny, and a sentimental streak softens the sarcasm…Zink’s novel captivates from the very first page... Comic, sympathetic, heartbreaking and outrageous, Mislaid is a wonderful, raucous book with everything of life in it.”- Shelf Awareness
— Shelf Awareness

“Perhaps most impressive about ... Mislaid is the author’s seemingly endless capacity for wit…Zink peppers her story with clever one-liners and quick exchanges….It’s smart, sharp prose that invests the reader in the story.
— Electric Literature

“Zink’s deadpan wit is matched by an ethical deadpan… [She] isn’t a moralist. She creates fictional worlds beyond the bounds of the going taboos, then pushes those bounds to the logical extremes. … Mislaid uses southern racism as fuel for devious comic flights.”
— New York magazine

“Zink’s life story and her fairy-tale path to publication have nothing on the antic sparks of her prose, her freewheeling extra-canonical allusiveness, her swings from the register of love to a mode of contempt… ”
— New York magazine

“Zink writes with energetic, ecstatic abandon… delves fearlessly and credibly into race and gender issues, onloading on old Virginia in just-right didactic bursts. Zink develops peculiar and wonderful characters, and she writes situational humor… with a deftness and ease it took John Irving twice as many books to master.”
— Paste

“Looking for a brainy yet breezy novel that addresses gender, race, and class issues with levity and has a happy ending? Try Nell Zink’s Mislaid… a funny, entertaining, lightweight highbrow novel perhaps best read in a single afternoon under a beach umbrella.”
— New York Journal of Books

“Neither a young careerist nor a long-suffering aspirant, Nell Zink has found her way to the literary middle by a path as refreshingly eccentric as her fiction.”
— Minneapolis Star Tribune

“Zink’s light touch and wry manner keep you laughing more than cringing...It’s Zink’s world, and it bears strong but not total resemblance to the United States. I was happy to spend 242 pages in it.”
— Buzzfeed

Bizarre as its plot is, Mislaid is more damning than any straight-faced, shame-inducing diatribe could be. Changing our attitudes about race is slow and unsteady… But evolution in hearts and minds, Zink seems to say, can and does take place.
— Washingtonian

“Rich in literary allusion, irony and humor. The novel is an entertaining romp that manages to make poets Gregory Corso and Allen Ginsberg distant minor characters, and is ultimately about reconciliation.”
— Durham-Herald Sun

“Nell Zink’s second novel, Mislaid, announces her as one of a handful of the best novelists on the American scene.”
— Flavorwire

A lesbian in the conservative South during the mid-1960s, Peggy falls under the spell of Lee, a gay aristocratic poet, in Zink’s zany farce. The comedy of errors cunningly exposes our deep-seated prejudices about race and desire.”
— O, the Oprah Magazine

“Shakespearean in shape, relentlessly antic, and utterly free of the pieties that afflict a lot of U.S. fiction, Mislaid is the hilarious comedy of race and gender we didn’t know we needed.”
— New York magazine / Vulture's 10 Best Books of 2015

“Everything from gender theory and academic politics to racial issues is delightfully skewered and upended... Nell Zink has written an antic novel about sex and race that’s not quite like anything else this year.”
— Wall Street Journal, Best Books of 2015

“Ms. Zink has an interesting mind, and, at its best, “Mislaid” reads like a Donna Tartt novel if Ms. Tartt had taken a night course in sweet brevity.”
— New York Times, Dwight Garner's Ten Best Books of 2015

“In Zink’s second novel, a baroque kind-of-comedy of errors, she presents characters who act just ludicrously enough to be human.”
— San Francisco Chronicle, 100 Best Books of 2015