Scarface and the Untouchable: Al Capone, Eliot Ness, and the Battle for Chicago (Paperback) 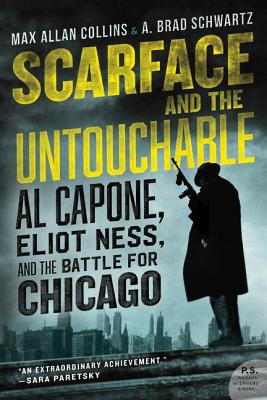 By Max Allan Collins, A. Brad Schwartz
Email or call for price

The new definitive history of gangster-era Chicago–a landmark work that is as riveting as a thriller. Now featuring a new preface, plus 115 photographs and a map of gangland Chicago.

A Chicago Public Library Best Book of the Year

In 1929, thirty-year-old gangster Al Capone ruled both Chicago's underworld and its corrupt government. To a public who scorned Prohibition, "Scarface" became a local hero and national celebrity. But after the brutal St. Valentine's Day Massacre transformed Capone into "Public Enemy Number One," the federal government found an unlikely new hero in a twenty-seven-year-old Prohibition agent named Eliot Ness. Chosen to head the legendary law enforcement team known as "The Untouchables," Ness set his sights on crippling Capone's criminal empire.

Today, no underworld figure is more iconic than Al Capone and no lawman as renowned as Eliot Ness. Yet in 2016 the Chicago Tribune wrote, "Al Capone still awaits the biographer who can fully untangle, and balance, the complexities of his life," while revisionist historians have continued to misrepresent Ness and his remarkable career.

Enter Max Allan Collins and A. Brad Schwartz, a unique and vibrant writing team combining the narrative skill of a master novelist with the scholarly rigor of a trained historian. Collins is the New York Times bestselling author of the gangster classic Road to Perdition. Schwartz is a rising-star historian whose work anticipated the fake-news phenomenon.

Scarface and the Untouchable draws upon decades of primary source research—including the personal papers of Ness and his associates, newly released federal files, and long-forgotten crime magazines containing interviews with the gangsters and G-men themselves. Collins and Schwartz have recaptured a bygone bullet-ridden era while uncovering the previously unrevealed truth behind Scarface's downfall. Together they have crafted the definitive work on Capone, Ness, and the battle for Chicago.

Max Allan Collins is a Mystery Writers of America Grand Master. He is the author of the Shamus Award-winning Nathan Heller thrillers and the graphic novel Road to Perdition, basis of the Academy Award-winning film starring Tom Hanks. His innovative Quarry novels led to a 2016 Cinemax series. He has completed a dozen posthumous Mickey Spillane mysteries, and wrote the syndicated Dick Tracy series for more than fifteen years. His one-man show, Eliot Ness: An Untouchable Life, was an Edgar Award finalist. He lives in Iowa.

A. Brad Schwartz is the author of Broadcast Hysteria: Orson Welles's War of the Worlds and the Art of Fake News, based in part on research from his senior thesis at the University of Michigan in Ann Arbor. He cowrote a documentary about the War of the Worlds broadcast for the PBS series American Experience. He is currently a doctoral candidate in American history at Princeton University.

“Essential. … A superior example [of true crime]. … When the subject is this fascinating and the telling so expertly done, it’s hard to resist.” — Seattle Times

“Compelling. … A very good book. … A narrative that reads with force and style.” — Chicago Tribune

“Scarface and the Untouchable revolutionizes our understanding of Al Capone and Eliot Ness. An indispensable exercise in Prohibition-era excitement.” — MATTHEW PEARL, author of The Dante Club and The Dante Chamber

“Scarface and the Untouchable is an extraordinary achievement. The writing is riveting, the research impeccable—including material never published before—and the history of a city and a country teetering on the brink of total lawlessness is a sober warning for our own age.” — SARA PARETSKY, author of the bestselling V.I. Warshawski novels

“A gripping take on Chicago’s past that reads like a novel.” — Chicago Magazine

“A page-turner, as gripping as any novel. ... A vividly detailed chronicle. ... What a great saga this is.” — LEONARD MALTIN

“Provide[s] a definitive account of Capone and Ness’s linked destinies. … Lively and masterfully written… with the scholarship to back it up.” — CrimeReads

“Scarface and the Untouchable reads like fiction. But it’s real. Collins and Schwartz bring to life an era of American which will never be replicated.” — OSCAR B. GOODMAN, legendary “mob attorney” and three-term mayor of Las Vegas

“The scholarship displayed in Scarface and the Untouchable is extraordinary, probing deeply into the activities, interrelationships and mindsets of the many principal characters.” — BookPage

“Vivid. … A deep and detailed dive into a staple of American popular mythology.” — Washington Independent Review of Books

“An informed and valuable addition to the numerous books about Capone and Ness.” — Publishers Weekly

“A book full of fascinating details… [and] made-for-movies scenes.” — The Star-Ledger

“Readers will enjoy this dual biography, which reads like a popular novel, and will learn that Capone could be a cold-blooded killer.” — Lansing City Pulse

“Entrancing. … Will keep you enthralled, reading for hours. ... [A] monumental volume, including the discovery of considerable previously unknown information.” — Lansing State Journal

“Scarface and the Untouchable is a page-turning history that overwhelms the past retellings of the pre-eminent battle against organized crime. An excellent book that is history, biography, and true crime.” — San Francisco Book Review