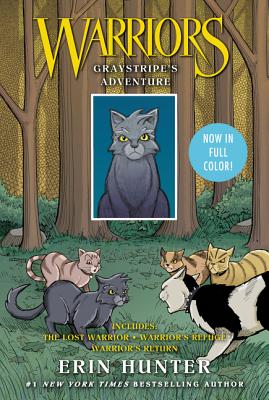 A full-color collection of three manga adventures from the world of Erin Hunter’s #1 bestselling Warriors series—never before available in color!

This epic volume includes all three books in the Graystripe’s Adventure graphic novel trilogy: The Lost Warrior, Warrior’s Refuge, and Warrior’s Return. Set after the events of Warriors: The New Prophecy #3: Dawn, this graphic novel adventure follows one of the series’ most beloved characters as he embarks on a difficult journey to return to his home among the Clans.

Graystripe, deputy of ThunderClan, has been captured by Twolegs. He longs to go back to the forest and his Clan, and sets off in search of his Clanmates alongside a feisty kittypet named Millie. But with the forest destroyed, and no clear path to lead him, how will Graystripe find his way home?

Erin Hunter is inspired by a love of cats and a fascination with the ferocity of the natural world. In addition to having great respect for nature in all its forms, Erin enjoys creating rich mythical explanations for animal behavior. She is the author of the Warriors, Seekers, Survivors, Bravelands, and Bamboo Kingdom series. Erin lives in the UK.