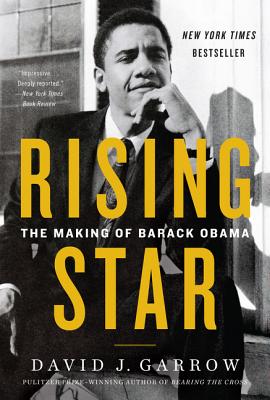 Barack Obama's speech at the 2004 Democratic National Convention instantly catapulted him into the national spotlight and led to his election four years later as America's first African-American president. In this penetrating biography, David J. Garrow delivers an epic work about the life of Barack Obama, creating a rich tapestry of a life little understood, until now.

Rising Star: The Making of Barack Obama captivatingly describes Barack Obama's tumultuous upbringing as a young black man attending an almost-all-white, elite private school in Honolulu while being raised almost exclusively by his white grandparents. After recounting Obama's college years in California and New York, Garrow charts Obama's time as a Chicago community organizer, working in some of the city's roughest neighborhoods; his years at the top of his Harvard Law School class; and his return to Chicago, where Obama honed his skills as a hard-knuckled politician, first in the state legislature and then as a candidate for the United States Senate.

Detailing a scintillating, behind-the-scenes account of Obama's 2004 speech, a moment that labeled him the Democratic Party's "rising star," Garrow also chronicles Obama's four years in the Senate, weighing his stands on various issues against positions he had taken years earlier, and recounts his thrilling run for the White House in 2008.

In Rising Star, David J. Garrow has created a vivid portrait that reveals not only the people and forces that shaped the future president but also the ways in which he used those influences to serve his larger aspirations. This is a gripping read about a young man born into uncommon family circumstances, whose faith in his own talents came face-to-face with fantastic ambitions and a desire to do good in the world. Most important, Rising Star is an extraordinary work of biography—tremendous in its research and storytelling, and brilliant in its analysis of the all-too-human struggles of one of the most fascinating politicians of our time.

David J. Garrow is Professor of Law & History and Distinguished Faculty Scholar at the University of Pittsburgh School of Law. He is the author of four books, including Bearing the Cross: Martin Luther King, Jr., and the Southern Christian Leadership Conference, which won the Pulitzer Prize for Biography. He is a regular contributor to the Washington Post, New York Times, and The American Prospect. He lives in Pittsburgh, Pennsylvania.

“A prodigious work. ... Each page crackles with the strength of [Garrow’s] research.” — USA Today

“Extremely well-done. ... Garrow slices the fat of fiction away from fact. ... [A book] equally as valuable for what it is saying about the present and the future as well as the past.” — Atlanta Black Star

“Revealing. ... Probing. ... [Garrow] tells us how Obama lived, and explores the calculations he made in the decades leading up to his winning the presidency.”  — Washington Post

“Phenomenal… Essential. … Persuasive. … Authoritative. … A stunning and indispensable work of history. … A masterwork of historical and journalistic research… [and] a terrific read.” — David Greenberg, Politico

“One of the most impressive presidential biographies... [and] a look at the social construction of race.” — Bloomberg (a Must-Read of 2017)

“Gripping. ... [A] compelling read [that] should appeal to political junkies and insiders. ... Foundational.” — Washington Independent Review of Books

“Learned. ... May endure in the American presidential canon.” — Globe and Mail (Toronto)

“Definitive. ... Fascinating. ... So interesting, you’ll be hard-pressed to put it down.” — Paul Lisnek, WGN Chicago

“You definitely want to pick it up. ... Very thorough, very well-researched.” — Roland Martin, NEWS ONE NOW

“Comprehensive. ... Contains many insights to Obama’s life and character. ... Will be the defining work on Obama’s early life for years to come.” — The Federalist

“Groundbreaking. ... A candid examination of the former president’s life before the White House.” — Daily Nebraskan