My Name Is Prince (Hardcover) 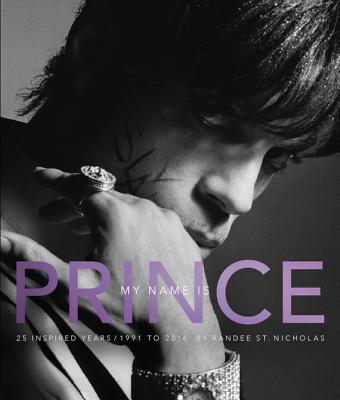 There has never been or will there ever be an artist like Prince. “A 5' 3? Mastermind . . . satiated with virtuosity, controversy, stubbornness, and poise . . . His influence on Music transcended any and every category given titles by industry wizards and musicologists. Pop, Rock, Rhythm & Blues, Classical, Funk, Jazz, Soul, and Rap . . . He did it all and he did it well . . . and in his time . . . He did it first,” writes Randee St. Nicholas.

For twenty-five years, this legendary photographer, with a storied career of her own, worked closely with Prince, capturing some of his most intimate and revealing moments both on and off stage.

Now, the fruits of their numerous collaborations are on full display in My Name Is Prince, the largest collection of the most iconic photographs that will ever exist of one of the world’s greatest superstars.

In this dazzling collector’s edition, readers are treated to a front-row seat to their innovative and awe-inspiring projects, from his music videos Gett Off and My Name Is Prince; to their impromptu photo shoots…just because; their adventures around the world from London to Tokyo to Prague, and his breathtaking, showstopping live concert appearances from great stages at Coachella and the 02 Arena to intimate nightclubs.

Many of the trips, we will discover, are either unplanned or hastily arranged. And yet you will marvel at the results—as Prince expected nothing less than the best.

When they met, Prince was ready for a change. The quixotic performer was known for seizing a moment and then on to the next.

After their initial 1991 photo shoot in her Los Angeles studio, Prince assured St. Nicholas, “Don’t worry, I’ll be back.”

Over the next twenty-five years he would return again and again, challenging himself and St. Nicholas to reach higher and to go further with every original pursuit.

My Name Is Prince is the story of that unique working relationship and artistic evolution that produced many stunning images and lasted from their first meeting until the end:

He had incredible timing, not just musically but spiritually, emotionally, and creatively . . . that Prince rhythm fueled a spontaneity that was contagious, enabling you to be more fearless and flexible than you thought you ever could be. When he would call . . . you had to be ready for anything . . . to jump on a plane with an hour or two notice, to put together a crew in a city you had never worked in before without any preparation time . . . or to simply just go outside your house at four in the morning where he was parked in his car, waiting for you to get in and listen to new music he had just recorded. One never knew what to expect . . . but it was always an inspired adventure.

Told through 384 pages of striking visuals and poignant, intimate stories, the insights revealed in My Name Is Prince show a side of the enigmatic megastar that few have ever seen.

We go beyond the genius and meet the man—playful, moody, disciplined, sensual, serious, and soulful.

And in hundreds of photographs, we see that incandescent light behind his hypnotic eyes; that sly smile, strong hands, and transformative and transcendent presence that connected people from every part of the globe through his music.

As his sound lives on, My Name Is Prince is a visual testimony to his greatness and a space that can never be filled.

Randee St. Nicholas is an acclaimed photographer, designer, and director based in Los Angeles, California. She is known worldwide for her collaborations with prominent musicians and actors.

“Nostalgic and reverential, this book—the second St. Nicholas produced with/for Prince—is a celebration of friendship and artistry. Prince fans are sure to appreciate the book, and those interested in art photography will also find the collection highly appealing…a dazzling visual homage to a music icon gone too soon.”— — Kirkus Reviews

“As someone who worked alongside the musical icon for a quarter century, capturing some of his most remarkable and private moments along the way, St. Nicholas received a golden ticket into a world that many of us can only imagine from a distance.” — GQ