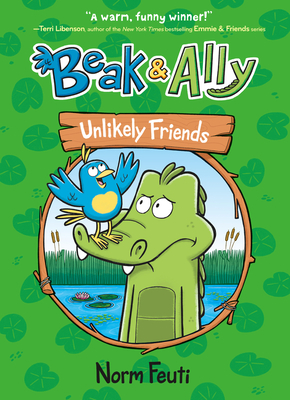 This is book number 1 in the Beak & Ally series.

“What do you do when a noisy bird named Beak lands on your nose? You’ll probably grumble but you just might make a friend. Although (as mentioned) a noisy one. Not to mention one who is loyal and fun to be around (even if they only know one song). A great book about friendship, sticking together, and how sometimes quiet is good, but so is a noisy friend.”
— Jeanette Sessions, Northshire Bookstore, Manchester Center, VT

Theodor Seuss Geisel Honor Award winner! “What do you get when you cross a crusty alligator and a perky bird? A surprising friendship you’ll be sure to cheer for. Beak and Ally is a warm, funny winner!” —Terri Libenson, author of the New York Times bestselling Emmie & Friends series

A brand-new early reader graphic novel series about finding friendship in unexpected places! This fun and funny buddy comedy is perfect for fans of Narwhal & Jelly, emerging readers, and all kids who love comics.

Ally the alligator is perfectly happy being alone . . . until one day a noisy bird named Beak lands on her snout.

Beak thinks Ally is lonely and needs a friend. He has all sorts of friendship goals in mind, like riding bikes together, going to the movies together, and even solving mysteries together! But when a Long-Billed Party Pooper crashes Beak’s nest-warming party, Ally decides to show Beak something important to her: sticking up for what’s right.

Norm Feuti is a nationally syndicated cartoonist, author, and freelance illustrator. King of Kazoo was his first graphic novel. Hello, Hedgehog! is his first early reader series. Norm lives in Massachusetts with his wife and children.

Norm Feuti is a nationally syndicated cartoonist, author, and freelance illustrator. King of Kazoo was his first graphic novel. Hello, Hedgehog! is his first early reader series. Norm lives in Massachusetts with his wife and children.

Feuti’s art is bright and expressive. Clean lines, plenty of white space between panels, and a clear narrative arc with three short chapters make this a solid choice for emerging readers. — Kirkus Reviews