The Annals of Imperial Rome (Paperback) 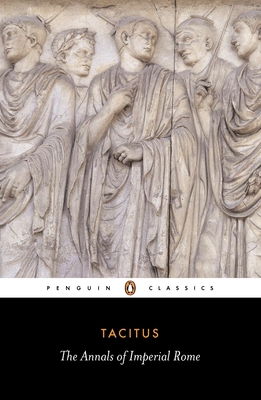 His last work, regarded by many as the greatest work of contemporary scholarship, Tacitus' The Annals of Imperial Rome recount with depth and insight the history of the Roman Empire during the first century A.D. This Penguin Classics edition is translated with an introduction by Michael Grant. Tacitus' Annals of Imperial Rome recount the major historical events from the years shortly before the death of Augustus up to the death of Nero in AD 68. With clarity and vivid intensity he describes the reign of terror under the corrupt Tiberius, the great fire of Rome during the time of Nero, and the wars, poisonings, scandals, conspiracies and murders that were part of imperial life. Despite his claim that the Annals were written objectively, Tacitus' account is sharply critical of the emperors' excesses and fearful for the future of Imperial Rome, while also filled with a longing for its past glories.

Michael Grant's translation vividly captures the emotional patriotism of Tacitus' moral tone, offset by a lucid understanding that Rome is doomed, and conveys with cinematic vigour the lives of the great Emperors who laid the foundations of modern Europe.

For more than seventy years, Penguin has been the leading publisher of classic literature in the English-speaking world. With more than 1,700 titles, Penguin Classics represents a global bookshelf of the best works throughout history and across genres and disciplines. Readers trust the series to provide authoritative texts enhanced by introductions and notes by distinguished scholars and contemporary authors, as well as up-to-date translations by award-winning translators.

Tacitus studied rhetoric in Rome and rose to eminence as a pleader at the Roman Bar. In 77 he married the daughter of Agricola, conqueror of Britain, of whom he later wrote a biography. His other works includethe Germania and the Historiae.

Michael Grant's academic titles include Chancellor's Medallist and Fellow of Trinity College, Cambridge, and President of the Classical Association.