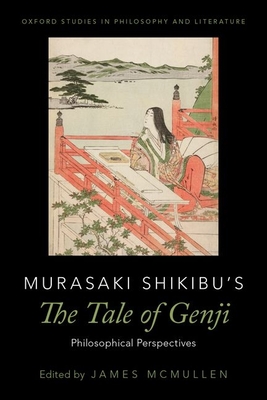 By James McMullen (Editor)
Email or call for price

Murasaki Shikibu's The Tale of Genji is variously read as a work of feminist protest, the world's first psychological novel and even as a post-modern masterpiece. Commonly seen as Japan's greatest literary work, its literary, cultural, and historical significance has been thoroughly
acknowledged. As a work focused on the complexities of Japanese court life in the Heian period, however, the The Tale of Genji has never before been the subject of philosophical investigation. The essays in this volume address this oversight, arguing that the work contains much that lends itself to
philosophical analysis. The authors of this volume demonstrate that The Tale of Genji confronts universal themes such as the nature and exercise of political power, freedom, individual autonomy and agency, renunciation, gender, and self-expression; it raises deep concerns about aesthetics and the role of art, causality,
the relation of man to nature, memory, and death itself. Although Murasaki Shikibu may not express these themes in the text as explicitly philosophical problems, the complex psychological tensions she describes and her observations about human conduct reveal an underlying framework of philosophical
assumptions about the world of the novel that have implications for how we understand these concerns beyond the world of Genji. Each essay in this collection reveals a part of this framework, situating individual themes within larger philosophical and historical contexts. In doing so, the essays
both challenge prevailing views of the novel and each other, offering a range of philosophical interpretations of the text and emphasizing the The Tale of Genji's place as a masterful work of literature with broad philosophical significance.

James McMullen, a Fellow of the British Academy, is a specialist on the history of Confucianism in Japan. He began his teaching career at the University of Toronto and is currently a Fellow Emeritus at Pembroke and St Antony's Colleges in the University of Oxford.