Smashing the Liquor Machine: A Global History of Prohibition (Hardcover) 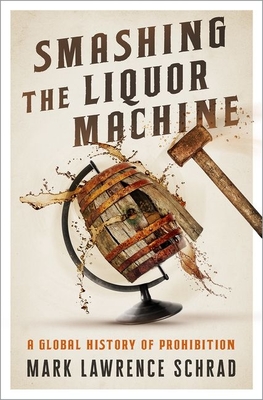 This is the history of temperance and prohibition as you've never read it before: redefining temperance as a progressive, global, pro-justice movement that affected virtually every significant world leader from the eighteenth through early twentieth centuries. When most people think of the prohibition era, they think of speakeasies, rum runners, and backwoods fundamentalists railing about the ills of strong drink. In other words, in the popular imagination, it is a peculiarly American history. Yet, as Mark Lawrence Schrad shows in Smashing the Liquor Machine, the conventional scholarship on prohibition is extremely misleading for a simple reason: American prohibition was just one piece of a global phenomenon. Schrad's pathbreaking history of prohibition looks at the anti-alcohol movement around the globe through the experiences of pro-temperance leaders like Vladimir Lenin, Leo Tolstoy, Thom's Masaryk, Kemal Atat rk, Mahatma Gandhi, and anti-colonial activists across Europe, Asia, Africa, and the Middle East. Schrad argues that temperance wasn't "American exceptionalism" at all, but rather one of the most broad-based and successful transnational social movements of the modern era. In fact, Schrad offers a fundamental re-appraisal of this colorful era to reveal that temperance forces frequently aligned with progressivism, social justice, liberal self-determination, democratic socialism, labor rights, women's rights, and indigenous rights. Placing the temperance movement in a
deep global context, forces us to fundamentally rethink its role in opposing colonial exploitation throughout American history as well. Prohibitionism united Native American chiefs like Little Turtle and Black Hawk; African-American leaders Frederick Douglass, Ida Wells, and Booker T. Washington; suffragists Elizabeth Cady Stanton, Susan B. Anthony, and Frances Willard; progressives from William Lloyd Garrison to William Jennings Bryan; writers F.E.W. Harper and Upton Sinclair, and even American presidents from Thomas Jefferson and Abraham Lincoln to Theodore Roosevelt and Woodrow Wilson. Progressives rather than puritans, the global temperance movement advocated communal self-protection against the corrupt and predatory "liquor machine" that had become exceedingly rich off the misery and addictions of the poor around the world, from the slums of South Asia to the beerhalls of Central Europe to the Native American reservations of the United States. Unlike many traditional "dry" histories, Smashing the Liquor Machine gives voice to minority and subaltern figures who resisted the global liquor industry, and further highlights that the impulses that led to the temperance movement were far more progressive and variegated than American readers have been led to believe.

Mark Lawrence Schrad is an Associate Professor of Political Science at Villanova University. His most recent book, Vodka Politics: Alcohol, Autocracy, and the Secret History of the Russian State (Oxford, 2014) has been translated into Polish, Slovak, Lithuanian, and Chinese. He is also the author of The Political Power of Bad Ideas: Networks, Institutions, and the Global Prohibition Wave (Oxford, 2010).