Meaning, Truth, and the Limits of Analysis: Ten Studies (Hardcover) 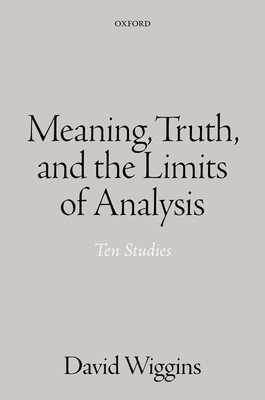 By David Wiggins
Email or call for price

This volume draws together work by David Wiggins on topics to do with language, meaning, truth, and the limit of semantic analysis, from 1980 to 2020. Each chapter draws upon previously published material, but that material has been revised, sometimes significantly, for republication here. Opening with a selective account of a century's work in the philosophy of meaning, from Frege and Wittgenstein to the late twentieth century, the book engages first with the nuts and bolts of sentence-construction: predicates and the copula, quantifiers, names, existence treated as a second-level
predicate, and adverbial modification. The following five chapters then treat of definition and (as dreamt of by Leibniz and others) the terminus of semantic analysis; the idea of natural languages as real things with a history; the idea of truth conceived as correlative with inquiry (C. S. Peirce)
and, finally, the properties we look for in truth itself--the marks, as Frege or Leibniz might have said, of the concept true.

David Wiggins, Emeritus Professor and Emeritus Fellow, New College, Oxford David Wiggins was Wykeham Professor of Logic at the University of Oxford from 1993 until his retirement in 2000. Before that, he was Professor at Bedford College, London; Fellow of University College, Oxford; and Professor at Birkbeck College, London. He is the author of Identity andSpatio-Temporal Continuity (Blackwell, 1967), Sameness and Substance (Blackwell, 1980), Needs, Values, Truth (amended 3rd edition Oxford, 2002), Sameness and Substance Renewed (Cambridge, 2001), Ethics: Twelve Lectures on the Philosophy of Morality (Penguin, 2006), and Continuants: Their Activity, their Being, and their Identity (Oxford, 2018).