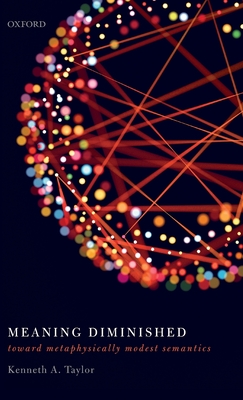 By Kenneth A. Taylor
Email or call for price

Meaning Diminished examines the complex relationship between semantic analysis and metaphysical inquiry. Kenneth A. Taylor argues that we should expect linguistic and conceptual analysis of natural language to yield far less metaphysical insight into what there is - and the nature of what there is - than many philosophers have imagined. Taking a strong stand against the so-called linguistic turn in philosophy, Taylor contends that philosophers as diverse as Kant, with his Transcendental Idealism, Frege, with his aspirational Platonism, Carnap with his distinction between internal and external questions, and Strawson, with his descriptive metaphysics, have placed too much confidence in the ability of linguistic and conceptual analysis to achieve deep insight into matters of ultimate metaphysics. He urges philosophers who seek such insight to turn away from the interrogation of language and concepts and back to the more direct interrogation of reality itself. In doing so, he maps
out the way forward toward a metaphysically modest semantics, in which semantics carries less weighty metaphysical burdens, and toward a revisionary and naturalistic metaphysics, untethered to the a priori analysis of ordinary language.

Kenneth A. Taylor, Henry Waldgrave Stuart Professor of Philosophy, Stanford University Kenneth Taylor is Henry Waldgrave Stuart Professor of Philosophy at Stanford University. He is also director of Stanford's interdisciplinary program in Symbolic Systems. His work lies at the intersection of the philosophy of language and the philosophy of mind, and he also writes about the metaphysics of normativity. He is the author of many books and articles, as well as the co-host and co-creator of the long-running, nationally syndicated radio program and podcast, Philosophy Talk.