The Pursuit of an Authentic Philosophy: Wittgenstein, Heidegger, and the Everyday (Hardcover) 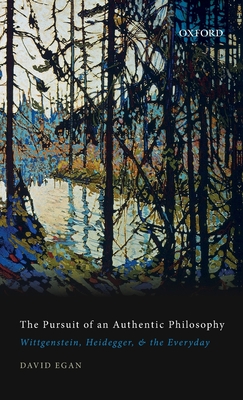 By David Egan
Email or call for price

Superficially, Wittgenstein and Heidegger seem worlds apart: they worked in different philosophical traditions, seemed mostly ignorant of one another's work, and Wittgenstein's terse aphorisms in plain language could not be farther stylistically from Heidegger's difficult prose. Nevertheless,
Wittgenstein's Philosophical Investigations and Heidegger's Being and Time share a number of striking parallels. In particular, this book shows that both authors manifest a similar concern with authenticity. David Egan develops this position in three stages. Part One explores the emphasis both
philosophers place on the everyday, and how this emphasis brings with it a methodological focus on recovering what we already know rather than advancing novel theses. Part Two argues that the dynamic of authenticity and inauthenticity in Being and Time finds homologies in Philosophical
Investigations. Here Egan particularly articulates and defends a conception of authenticity in Wittgenstein that emphasizes the responsiveness and reciprocity of play. Part Three considers how both philosophers' conceptions of authenticity apply reflexively to their own work: each is concerned not
only with the question of what it means to exist authentically but also with the question of what it means to do philosophy authentically. For both authors, the problematic of authenticity is intimately linked to the question of philosophical method.

David Egan, Visiting Assistant Professor, CUNY Hunter College Born and raised in Vancouver, Canada, David Egan has lived and studied in Canada, the USA, the UK, and Germany. He received his DPhil from the University of Oxford in 2012, working under the supervision of Stephen Mulhall. He has taught at Oxford, McMaster University, the University of Chicago, andHunter College. He is co-editor (with Stephen Reynolds and Aaron James Wendland) of Wittgenstein and Heidegger (Routledge 2013) and has published articles on Wittgenstein, Heidegger, Austin, and the philosophy of literature. David leads a second life as a playwright and has had work produced inCanada, the USA, and the UK.