Avenging the People: Andrew Jackson, the Rule of Law, and the American Nation (Hardcover) 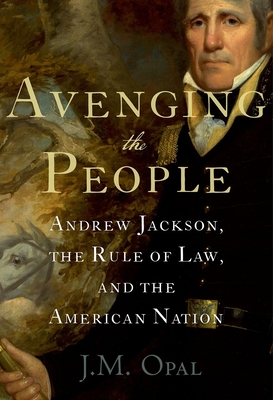 Most Americans know Andrew Jackson as a frontier rebel against political and diplomatic norms, a populist champion of ordinary people against the elitist legacy of the Founding Fathers. Many date the onset of American democracy to his 1829 inauguration. Despite his reverence for the sovereign people, however, Jackson spent much of his career limiting that sovereignty, imposing new and often unpopular legal regimes over American lands and markets. He made his name as a lawyer, businessman, and official along the Carolina and Tennessee frontiers,
at times ejecting white squatters from native lands and returning slaves to native planters in the name of federal authority and international law. On the other hand, he waged total war on the Cherokees and Creeks who terrorized western settlements and raged at the national statesmen who refused to
avenge the blood of innocent colonists. During the long war in the south and west from 1811 to 1818 he brushed aside legal restraints on holy genocide and mass retaliation, presenting himself as the only man who would protect white families from hostile empires, heathen warriors, and rebellious
slaves. He became a towering hero to those who saw the United States as uniquely lawful and victimized. And he used that legend to beat back a range of political, economic, and moral alternatives for the republican future. Drawing from new evidence about Jackson and the southern frontiers, Avenging the People boldly reinterprets the grim and principled man whose version of American nationhood continues to shape American democracy.

J.M. Opal is Associate Professor of History at McGill University. He is the author of Beyond the Farm: National Ambitions in Rural New England and the editor of Common Sense and Other Writings by Thomas Paine.