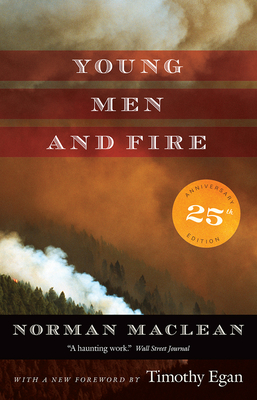 By Norman Maclean, Timothy Egan (Foreword by)
Email or call for price

A devastating and lyrical work of nonfiction, Young Men and Fire describes the events of August 5, 1949, when a crew of fifteen of the US Forest Service’s elite airborne firefighters, the Smokejumpers, stepped into the sky above a remote forest fire in the Montana wilderness. Two hours after their jump, all but three of the men were dead or mortally burned. Haunted by these deaths for forty years, Norman Maclean puts together the scattered pieces of the Mann Gulch tragedy in Young Men and Fire, which won the National Book Critics Circle Award.

Alongside Maclean’s now-canonical A River Runs through It and Other Stories, Young Men and Fire is recognized today as a classic of the American West. This twenty-fifth anniversary edition of Maclean’s later triumph—the last book he would write—includes a powerful new foreword by Timothy Egan, author of The Big Burn and The Worst Hard Time. As moving and profound as when it was first published, Young Men and Fire honors the literary legacy of a man who gave voice to an essential corner of the American soul.

Norman Maclean (1902–90), woodsman, scholar, teacher, and storyteller, grew up in and around Missoula, Montana, and worked for many years in logging camps and for the United States Forest Service before beginning his academic career. He was the William Rainey Harper Professor of English at the University of Chicago until 1973.

“A magnificent drama of writing, a tragedy that pays tribute to the dead and offers rescue to the living. . . . Maclean’s search for the truth, which becomes an exploration of his own mortality, is more compelling even than his journey into the heart of the fire. . . . A classic.”
— New York Times Book Review, Editor’s Choice as one of the Best Books of 1992

“A taut, terrifying yet poetic account. . . . Maclean . . . is unsparing in his prose and dogged in his reporting, piecing together the elements that led to more than a dozen men suffocating and burning to death. The story, which I’ve read at least four times now, is agonizing to read, making the hairs on my arms stand on end. It is also one of the most pleasurable experiences I’ve had.”
— Anna Holmes

“An astonishing book. In compelling language, both homely and elegant, Young Men and Fire miraculously combines a fascinating primer on fires and firefighting, a powerful, breathtakingly real reconstruction of a tragedy, and a meditation on writing, grief, and human character. . . . Maclean’s last book will stir your heart and haunt your memory.”
— Timothy Foote

“Maclean is always with the brave young dead. . . . They could not have found a storyteller with a better claim to represent their honor. . . . A great book.”
— James R. Kincaid

“Beautiful. . . . A dark American idyll of which the language can be proud.”
— Robert M. Adams

“A treasure: part detective story, part western, part tragedy, part elegy and wholly eloquent ghost story in which the dead and the living join ranks cheerfully, if sometimes eerily, in a search for truth and the rest it brings.”
— Joseph Coates

“Young Men and Fire is a somber and poetic retelling of a tragic event. It is the pinnacle of smokejumping literature and a classic work of twentieth-century nonfiction.”
— John Holkeboer

"The bravery of an unsung profession; this is a tale of natural disaster, adventure, and male camaraderie."
— Gear Patrol

"Before Norman Maclean was a writer and professor, he fought fires for the Forest Service. When he was a teenager, he nearly died in a Montana wildfire. 'It came so close it sounded as if it were cracking bones, and mine were the only bones around,' he writes. It’s through that memory of terror, thirst, and exhaustion that Maclean begins his book Young Men and Fire. Thirteen 'smokejumpers'—firefighters who parachute into the wilderness—died in the 1949 Mann Gulch fire. With an almost obsessive attention to detail, Maclean reconstructs their story using the skill and sensitivity he honed as a novelist."
— Daniel A. Gross