Science on a Mission: How Military Funding Shaped What We Do and Don’t Know about the Ocean (Hardcover) 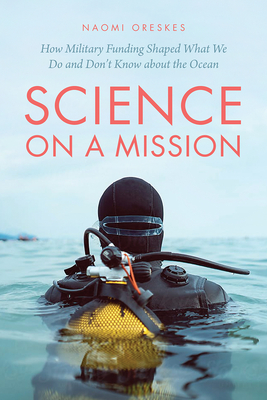 By Naomi Oreskes
Email or call for price

A vivid portrait of how Naval oversight shaped American oceanography, revealing what difference it makes who pays for science.

What difference does it make who pays for science?

Some might say none. If scientists seek to discover fundamental truths about the world, and they do so in an objective manner using well-established methods, then how could it matter who’s footing the bill? History, however, suggests otherwise. In science, as elsewhere, money is power. Tracing the recent history of oceanography, Naomi Oreskes discloses dramatic changes in American ocean science since the Cold War, uncovering how and why it changed. Much of it has to do with who pays.

After World War II, the US military turned to a new, uncharted theater of warfare: the deep sea. The earth sciences—particularly physical oceanography and marine geophysics—became essential to the US Navy, which poured unprecedented money and logistical support into their study. Science on a Mission brings to light how this influx of military funding was both enabling and constricting: it resulted in the creation of important domains of knowledge but also significant, lasting, and consequential domains of ignorance.

As Oreskes delves into the role of patronage in the history of science, what emerges is a vivid portrait of how naval oversight transformed what we know about the sea. It is a detailed, sweeping history that illuminates the ways funding shapes the subject, scope, and tenor of scientific work, and it raises profound questions about the purpose and character of American science. What difference does it make who pays? The short answer is: a lot.

Naomi Oreskes is professor of the history of science at Harvard University. She is the author of many books, including Merchants of Doubt and, most recently, Why Trust Science?

"Impressive and authoritative. . . . Over the past two decades, Oreskes has helped transform how scholars understand the history of scientific and political debates over continental drift and anthropogenic climate change. Her latest work weaves together insights from these and other intellectual spheres to deliver a crucial message: Patronage of knowledge production—that is, who pays for science—matters deeply. . . . Oreskes uses fascinating historical episodes to reveal serious, underappreciated consequences of oceanographers' prolonged reliance on secret, mission-driven navy projects. . . . We need more historical scholarship on how powerful entities produce ignorance as well as knowledge, and Oreskes provides a model for doing so. . . . As an exposé of how navy-sponsored oceanographers wound up constraining their own research agendas and believing their own myths, the book should give pause to all scientists who consider themselves immune to the potential influence of their funders, or who romanticize the golden age of military scientific patronage."
— Science

"Insightful. . . . The book reminds us that science does not happen in a vacuum."
— Scientific American

"Science on a Mission is what you want in a history: interesting research, stories with context and multiple points of view, clearly and compellingly written."
— Nature

"With its empirical richness and its conceptual concerns, this book is essential reading."
— Metascience

"Anyone who really wants to understand Cold War-era oceanography now has a definitive text to turn to... Oreskes makes a strong case for why histories of physics must now encompass oceanography."
— Physics Today

"Important and fascinating work. . . . The book is well documented and features many interesting stories and illustrations that professionals and academicians will find appealing. . . . Highly recommended."
— Choice

"In Science on a Mission, historian Naomi Oreskes delves into the role of patronage in science, what emerges is a vivid portrait of how naval oversight transformed what we know about the sea. It is a detailed, sweeping history that illuminates the ways funding shapes the subject, scope, and tenor of research, and it raises profound questions about American science. What difference does it make who pays? A lot."
— Yale Climate Connections

"Had I known then what I have learned from Oreskes’s new book, I would have been a better Scripps director."
— Charles Kennel, former director, Scripps Institution of Oceanography

"Oreskes's timely, clear-eyed, and extensive history serves as a powerful reminder in a time when our oceans and basic science are under attack: we must defend scientific truth."
— Senator Sheldon Whitehouse, Rhode Island

"Science on a Mission is a subtle, human picture of science at war, both hot and cold. Focusing on three vastly important institutes of oceanography, Oreskes tracks how the demands of international conflict have shaped the discipline. In fascinating detail, she explores the discovery of the deep ocean currents and their dynamics; in another precisely documented section, she illuminates the military origins of the ‘pure science’ bathysphere Alvin. With engaging prose and scientific grasp, Oreskes gives us a rich and well-told history of how the navy’s engagement redefined the field, ushering in central discoveries of modern oceanography while hiding its secret-cloaked depths."
— Peter Galison, Harvard University

“With her characteristic but rare combination of philosophical and historical insight, and her sharp eye for the politics beneath the surface, Oreskes has skillfully interpreted the wide-ranging legacies of oceanography and brought them into our understanding of scientific—and political—debates of the present day."
— Katharine Anderson, York University

"Oreskes has given us a monumental history of the social and political construction of Cold War science. Her analysis lends fascinating insight to the role of the war economy in the creation of American oceanography and raises complex questions about scientific integrity, intellectual autonomy, and the difference between pure and tainted science."
— Matthew England, University of New South Wales

"Science on a Mission is a remarkable work of scholarship built on deep research into the institutions and people involved in advancing American oceanography at the height of the Cold War. Oreskes relies on a detailed approach, including over a dozen illustrations and diagrams alongside extensive quotations from relevant scientific papers, to provide internal histories, whether in accounting for how one experiment led to the next or how personalities and ideologies clashed within an institution. As such, the work makes important contributions to the literature and is an excellent companion to texts on naval and industrial laboratories."
— Isis

"In this book, Naomi Oreskes demonstrates once again that the history of science is not merely a discipline for the ivory tower. In her work on the denial of man-made climate change and on the procedures that guarantee the trustworthiness of scientific knowledge, she combines historical analysis with topics of current political importance in an exemplary manner."

“Highly recommended for anyone interested in the broad topics of geophysics, the history of the oceans, and how American naval spending influenced the shape of modern oceanography.”
— The Northern Mariner