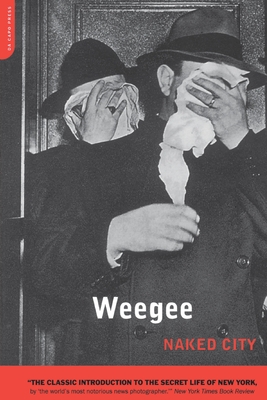 By Arthur Fellig Weegee
Email or call for price

Weegee was among the first to fully realize the camera's unique power to capture split-second drama and exaggerated emotion. But his profound influence on other photographers, most famously on Diane Arbus, derives not only from his sensational subject matter and his use of the blinding, close-up flash, but also from his eagerness to photograph the city at all hours, at all levels: coffee shops at three in the morning, hot summer evenings in the tenements, debutante balls, parties in the street, lovers on park benches, the destitute and the lonely. No other photographer has better revealed the non-stop spectacle of life in New York City.Weegee's first book, Naked City (1945), was a runaway success and made him a celebrity who suddenly had assignments from Life and Vogue. By the publication of his second book, Weegee's People (1946), he had cut the wires to his police radio and had begun to photograph the furred and bejeweled grandes dames at the Metropolitan Opera as well as his beloved street people. Naked Hollywood (1953) and Weegee by Weegee (1961) feature portraits of Marilyn Monroe, Andy Warhol, John F. Kennedy, Nikita Khruschev, and Liberace -- many of them viewed through the distorted lens of his Weegee-scope.Regarded as some of the most powerful images of twentieth-century photography, Weegee's work now resides in the permanent collection of the Museum of Modern Art.

Weegee (1900-1968), born Arthur Fellig, is widely acknowledged to be both the originator and reigning king of candid photojournalism, ushering in the age of tabloid culture while simultaneously elevating the sordid side of human life to the status of high art.