Wrath (The Faithful and the Fallen #4) (Paperback) 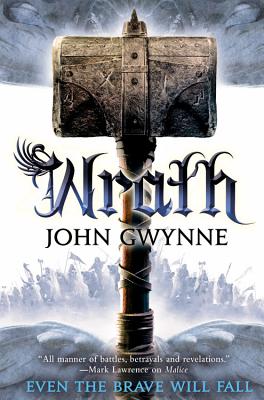 The fourth in the Faithful and the Fallen series from John Gwynne, an epic fantasy perfect for fans of George R. R. Martin, Brandon Sanderson and David Gemmell.

Events are coming to a climax in the Banished Lands, as the war reaches new heights. King Nathair has taken control of the fortress at Drassil and three of the Seven Treasures are in his possession. And together with Calidus and his ally Queen Rhin, Nathair will do anything to obtain the remaining Treasures. With all seven under his command, he can open a portal to the Otherworld. Then Asroth and his demon-horde will finally break into the Banished Lands and become flesh.

Meanwhile Corban has been taken prisoner by the Jotun, warrior giants who ride their enormous bears into battle. His warband scattered, Corban must make new allies if he hopes to survive. But can he bond with competing factions of warlike giants? Somehow he must, if he's to counter the threat Nathair represents.

His life hangs in the balance -- and with it, the fate of the Banished Lands.

John Gwynne studied and lectured at Brighton University. He's been in a rock 'n' roll band, playing the double bass, traveled the USA and lived in Canada for a time. He is married with four children and lives in Eastbourne, running a small family business rejuvenating vintage furniture. Malice is his debut novel.

"A series that promises the same degree of complexity and depth found in Robert Jordan's Wheel of Time books and George R. R. Martin's Song of Ice and Fire series."—Library Journal (starred review)

"Middle Earth-ish extravaganza with all the usual thrills, chills, spills and frills ... there's plenty of action."—Kirkus

"Three-dimensional characters, a gripping plot, and a world that became real to me ... this is the type of fantasy I love to read and I truly can't wait to read the next volume in The Faith and the Fallen!"—Fantasy Book Critic

"John Gwynne hits all the right spots in his epic tale of good vs evil . . . there's a lot of pleasure to be had in this debut novel; Gwynne is definitely one to watch."—SFX

"Warring clans, sleeping giants, Banished Lands and omens and portents ... a strong contender for 'if you like Game of Thrones, why not try this?' award."—Independent

"Readers will be keenly turning pages... This book would appeal to fans of the Game of Thrones series."—Booklist