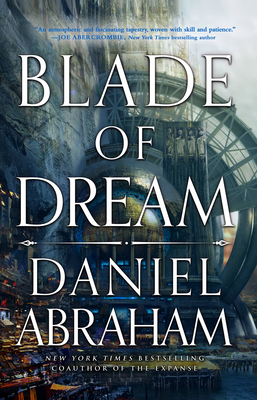 This is book number 2 in the The Kithamar Trilogy series.

From New York Times bestselling and critically acclaimed author Daniel Abraham, co-author of The Expanse, comes the second novel in a monumental epic fantasy trilogy that unfolds within the walls of a single great city, over the course of one tumultuous year.


Kithamar is a center of trade and wealth, an ancient city with a long, bloody history where countless thousands live and their stories endure.

Garreth Left is heir to one of Kithamar’s most prominent merchant families. The path of his life was paved long before he was born. Learn the family trade, marry to secure wealthy in-laws, and inherit the business when the time is right. But to Garreth, a life chosen for him is no life at all.

In one night, a chance meeting with an enigmatic stranger changes everything. He falls in love with a woman whose name he doesn’t even know, and he will do anything to find her again. His search leads him down corridors and alleys that are best left unexplored, where ancient gods hide in the shadows, and every deal made has a dangerous edge.

The path that Garreth chooses will change the course of not only those he loves, but the entire future of Kithamar’s citizens.

In Kithamar, every story matters -- and the fate of the city is woven from them all.

“An atmospheric and fascinating tapestry, woven with skill and patience.”—Joe Abercrombie, New York Times bestselling author of A Little Hatred on Age of Ash

“This new work bears the hallmark of a great Abraham work.”—Kirkus on Age of Ash

“Age of Ash’s Kithamar is a spectacular creation, a city brought to life by dense, intricate worldbuilding and subtle magic. Fans of Scott Lynch or Robert Jackson Bennett will enjoy this one.”—Django Wexler, author of Ashes of the Sun on Age of Ash

“Abraham builds this world with all the confident craftsmanship you’d expect from an author with his pedigree . . . . Kithamar is in the hands of a pro.”—SFX on Age of Ash