Arm of the Sphinx (The Books of Babel #2) (Paperback) 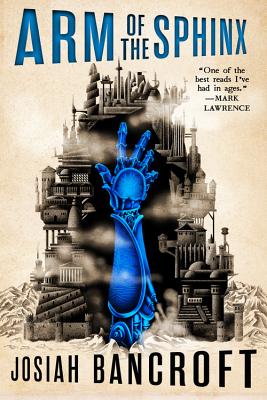 This is book number 2 in the The Books of Babel series.

Senlin continues his ascent up the tower in the word-of-mouth phenomenon fantasy series about one man's dangerous journey through a labyrinthine world.

"One of my favorite books of all time" -- Mark Lawrence on Senlin Ascends
The Tower of Babel is proving to be as difficult to reenter as it was to break out of. Forced into a life of piracy, Senlin and his eclectic crew are struggling to survive aboard their stolen airship as the hunt to rescue Senlin's lost wife continues.

Hopeless and desolate, they turn to a legend of the Tower, the mysterious Sphinx. But help from the Sphinx never comes cheaply, and as Senlin knows, debts aren't always what they seem in the Tower of Babel.

Time is running out, and now Senlin must choose between his friends, his freedom, and his wife.

Does anyone truly escape the Tower?

Josiah Bancroft started writing novels when he was twelve, and by the time he finished his first, he was an addict. Eventually, the writing of Senlin Ascends began, a fantasy adventure, not so unlike the stories that got him addicted to words in the first place.

He wanted to do for others what his favorite writers had done for him: namely, to pick them up and to carry them to a wonderful and perilous world that is spinning very fast. If he's done that with this book, then he's happy.

Josiah lives in Philadelphia with his wife, Sharon, their daughter Maddie, and their two rabbits, Mabel and Chaplin.

"The "Books of Babel" are something you hope to see perhaps once a decade - future classics, which may be remembered long after the series concludes."—Los Angeles Times on The Hod King

"Bancroft's world continues to teem with explosive energy, and he ranges ably from the transcendent to the vicious in an instant . . . . This volume not only matches but adds to the notable achievements of the first."—Publishers Weekly, starred review

"Senlin Ascends crosses the everyday strangeness and lyrical prose of Borges and Gogol with all the action and adventure of high fantasy. I loved it, and grabbed the next one as soon as I turned the last page."
—Django Wexler, author of The Thousand Names on Senlin Ascends

"Senlin Ascends is an adventure rife with character, voice and beauty-a well-polished knife drawn out slowly."—Sam Sykes, author of The City Stained Red on Senlin Ascends

"Senlin Ascends is a unique masterpiece. A brilliant debut. Highly recommended!"—Michael R. Fletcher, author of Beyond Redemption on Senlin Ascends

"With deceptive simplicity Bancroft brings this gothic place and its denizens to a colourful life...I loved it!"—Adrian Selby, author of Snakewood on Senlin Ascends

"This is fantasy storytelling of a high order."—The Toronto Star on Senlin Ascends

"Ticks along with the tight precision and artistry of a well-wound watch."—Kirkus on Senlin Ascends