The Fall of Babel (The Books of Babel #4) (Paperback) 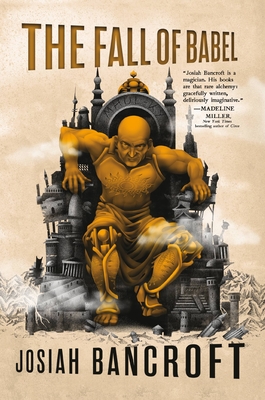 This is book number 4 in the The Books of Babel series.

The incredible final book in the phenomenon fantasy series described as “future classics" follows one man's dangerous journey through a labyrinthine world and the mysteries he uncovers along the way. (Los Angeles Times).

As Marat's siege engine bores through the Tower, erupting inside ringdoms and leaving chaos in its wake, Senlin can do nothing but observe the mayhem from inside the belly of the beast. Caught in a charade, Senlin desperately tries to sabotage the rampaging Hod King, even as Marat's objective grows increasingly clear. The leader of the zealots is bound for the Sphinx's lair and the unimaginable power it contains.

In the city under glass at the Tower's summit, Adam discovers a utopia where everyone inexplicably knows the details of his past. As Adam unravels the mystery of his fame, he soon discovers the crowning ringdom conceals a much darker secret.

Aboard the State of Art, Edith and her crew adjust to the reality that Voleta has awoken from death changed. She seems to share more in common with the Red Hand now than her former self. While Edith wars for the soul of the young woman, a greater crisis looms: They will have to face Marat on unequal footing and with Senlin caught in the crossfire.

And when the Bridge of Babel is finally opened, and the Brick Layer's true ambition revealed, neither they nor the Tower will ever be the same again.

Josiah Bancroft started writing novels when he was twelve, and by the time he finished his first, he was an addict. Eventually, the writing of Senlin Ascends began, a fantasy adventure, not so unlike the stories that got him addicted to words in the first place. He wanted to do for others what his favorite writers had done for him: namely, to pick them up and to carry them to a wonderful and perilous world that is spinning very fast. If he's done that with this book, then he's happy. Josiah lives in Philadelphia with his wife, Sharon, their daughter Maddie, and their two rabbits, Mabel and Chaplin.

"A delightfully open-ended and satisfying conclusion."—Booklist

“Josiah Bancroft brilliantly sticks the landing of his Books of Babel series. This fourth and conclusive volume … picks up each of the old threads, knots them off like a master sailor, and braids the whole into a beautiful tapestry.”—Locus Magazine

"The Hod King is a compelling and original novel; the "Books of Babel" are something you hope to see perhaps once a decade - future classics, which may be remembered long after the series concludes."—Los Angeles Times on The Hod King

"Brilliant debut fantasy . . . This novel goes off like a firework and suggests even greater things in the author's future."
—Publishers Weekly, starred review on Senlin Ascends