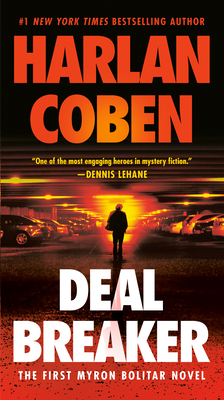 This is book number 1 in the Myron Bolitar series.

The debut of Myron Bolitar, a hotheaded, tenderhearted sports agent and one of the most fascinating and complex heroes in suspense fiction, Deal Breaker is a page-turning classic from Edgar Award–winner and master storyteller Harlan Coben.

“One of the most engaging heroes in mystery fiction.”—Dennis Lehane

Sports agent Myron Bolitar is poised on the edge of the big time. So is Christian Steele, a rookie quarterback and Myron’s prized client. But when Christian gets a phone call from a former girlfriend—a woman who everyone, including the police, believes is dead—the deal starts to go sour. Trying to unravel the truth about a family’s tragedy, a woman’s secret, and a man’s lies, Myron is up against the dark side of his business—where image and talent make you rich, but the truth can get you killed.

“What sets Harlan Coben above the crowd are wit and wicked nonchalance.”—Los Angeles Times

Harlan Coben is the winner of the Edgar, Shamus, and Anthony awards. His critically acclaimed novels have been published in forty-one languages around the world and have been number one bestsellers in more than half a dozen countries. In addition to the Myron Bolitar series (Deal Breaker, Drop Shot, Fade Away, Back Spin, One False Move, The Final Detail, Darkest Fear, Promise Me, Long Lost, Live Wire, Miracle Cure, and Play Dead), Coben is also the author of the young adult Mickey Bolitar series including Shelter and Seconds Away, and of Tell No One, Gone for Good, No Second Chance, Just One Look, The Innocent, The Woods, Hold Tight, Caught, and Stay Close.

“Coben is the modern master of the hook-and-twist.”—Dan Brown