Places of Mind: A Life of Edward Said (Hardcover) 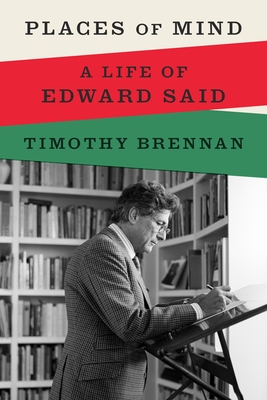 By Timothy Brennan
Email or call for price

The first comprehensive biography of the most influential, controversial, and celebrated Palestinian intellectual of the twentieth century

As someone who studied under Edward Said and remained a friend until his death in 2003, Timothy Brennan had unprecedented access to his thesis adviser’s ideas and legacy. In this authoritative work, Said, the pioneer of postcolonial studies, a tireless champion for his native Palestine, and an erudite literary critic, emerges as a self-doubting, tender, eloquent advocate of literature’s dramatic effects on politics and civic life.

Charting the intertwined routes of Said’s intellectual development, Places of Mind reveals him as a study in opposites: a cajoler and strategist, a New York intellectual with a foot in Beirut, an orchestra impresario in Weimar and Ramallah, a raconteur on national television, a Palestinian negotiator at the State Department, and an actor in films in which he played himself. Brennan traces the Arab influences on Said’s thinking along with his tutelage under Lebanese statesmen, off-beat modernist auteurs, and New York literati, as Said grew into a scholar whose influential writings changed the face of university life forever. With both intimidating brilliance and charm, Said melded these resources into a groundbreaking and influential countertradition of radical humanism, set against the backdrop of techno-scientific dominance and religious war. With unparalleled clarity, Said gave the humanities a new authority in the age of Reaganism, one that continues today.

Drawing on the testimonies of family, friends, students, and antagonists alike, and aided by FBI files, unpublished writings, and Said's drafts of novels and personal letters, Places of Mind synthesizes Said’s intellectual breadth and influence into an unprecedented, intimate, and compelling portrait of one of the great minds of the twentieth century.

Timothy Brennan is the author of several books, including At Home in the World: Cosmopolitanism Now; Borrowed Light: Vico, Hegel, and the Colonies; and Salman Rushdie and the Third World: Myths of the Nation. His writing has appeared in The Nation, The Times Literary Supplement, and other outlets. He teaches in the humanities at the University of Minnesota and has received fellowships from the Fulbright Foundation and the National Endowment for the Humanities.

"Brennan’s achievement is to do justice to the many things Said was and to articulate the synapses that connected his different worlds, so ideas that had their birth in one found their use in another. He has provided us with what you might call a manual of Said; a map of his thoughts and his positions, which, change as they did, could always be traced to a core set of ideas and drives and to do this without ever blunting Said’s subtlety or smudging the clarity of his ideas." —Ahdaf Soueif, The Guardian

“[A] rich explication of Said’s trajectory . . . Brennan is very fine on the evolution of Said’s thought and writing, as well as on his return, after his leukemia diagnosis in 1991, to the music that had been central to his youth . . . Said’s vitality and lasting importance as both a scholar and a public figure emerge strongly in these pages.” —Claire Messud, Harper’s

"A remarkably unhindered and often incisive intellectual portrait of its subject . . . The drama of [Said's] mind is given a good airing. Brennan concentrates on what Said most cared about in his work: a wise decision, since those are the reasons we still read him." —Thomas Meaney, New Statesman

"Places of Mind is an intellectual biography for which Brennan enjoyed unprecedented access to Said’s private papers and letters . . . Nuanced [and] intimate." —Avi Shlaim, Financial Times

"Brennan draws on an imposing array of material to write the first comprehensive portrait of one of America’s most distinguished postwar intellectuals." —Ayten Tartici, The New York Times Book Review

"Brennan’s book is a rich intellectual history, summarizing the content of Said’s major works, tracing the conditions of their creation, and mapping their influence. In detailing how specific conversations and locations stimulated his writing, and discussing the nature of Said’s unpublished poetry, fiction, and essays, Brennan breathes new life in a crowded field of Said studies." —Esmat Elhalaby, Boston Review

"[A] meticulous account . . . Brennan’s work will be invaluable reading for students of Said or the postcolonial critical movement his work sparked." --Publishers Weekly (starred review)

"Brennan effectively uses a range of primary sources to provide insight into what influenced Said’s thinking, and how he handled criticism of his noteworthy work . . . Brennan has succeeded in writing an account that is both an act of love and a solid study of a fascinating man." —Library Journal (starred review)

"Given the sheer amount of writing not only by but on Said, it seems at first surprising, and then inevitable, that no one has yet managed a comprehensive biography of him: there’s too much ground to cover, too many aspects of his long and controversial career to accommodate. Timothy Brennan’s rather remarkable Places of Mind seeks to rectify this . . . What emerges is a remarkably careful and considered narrative of Said’s life from cradle to grave—an account that is both synthesis and corrective . . . The care with which Brennan attends to Said’s writing, as well as its uneven reception, is palpable on every page." —Jane Hu, Bookforum

“Brennan, a literary scholar as well as a student and friend of Said, enjoyed broad access to his subject’s contacts and papers, allowing him to examine Said’s formative experiences and key relationships. The result is a warm and perceptive exploration of one of the twentieth century’s most compelling minds, and the passions that shaped it.” --Brendan Driscoll, Booklist

"In Places of Mind Timothy Brennan offers a portrait of Edward Said in all his complexity, revealing multiple aspects of his life and work unknown even to some of those closest to him. Relying on a remarkable range of sources, ranging from Said's private papers to extensive interviews, Brennan offers us an elegiac and nuanced portrait of one of the most influential literary figures of the past century, who was also the foremost public advocate for the rights of the Palestinian people." --Rashid Khalidi, author of Brokers of Deceit: How the U.S. Has Undermined Peace in the Middle East

"Timothy Brennan delivers a powerful and moving portrait of Edward Said, a multi-dimensional public intellectual, teacher, activist, artist, and scholar. As someone who knew the subject of this book quite well—as tennis partner, editor, and fellow traveler in Israel/Palestine—I feel on every page of this book in the presence of both confirmation and revelation. From his precocious childhood to his scholarly triumphs and critical battles, to his final struggles with illness and the intricacies of his “latestyle,” Said emerges as one of the essential intellectuals of our time, brave, inventive, incisive, and prophetic, portrayed against a historical background as complex and contradictory as its main subject." --W. J. T. Mitchell, author of Mental Traveler: A Father, a Son, and a Journey through Schizophrenia

"Timothy Brennan’s study of Edward Said is an outstanding intellectual and personal biography of one of the 20th century’s most brilliant and debated scholars. Deeply researched and erudite, Places of Mind is also written with the elegance and power of a novel that Said himself would have admired. To read these pages is to understand the enormity of Said’s often singular contributions and the profound void he has left behind. A tour de force." --Sara Roy, author of Unsilencing Gaza: Reflections on Resistance

“Edward W. Said was one of the most prominent public intellectuals of the late twentieth century. This long-needed biography by Timothy Brennan gives us a vivid picture of Said’s many passions and contradictions. The book is deeply researched, written with straightforward elegance, insightful in its psychology, and nuanced in its descriptions of Middle Eastern politics and also of the American academic world.” --Ralph P. Locke, author of Music and the Exotic: Images and Reflections

"Timothy Brennan’s biography of Edward Said is a thrilling read. It provides a critical window into the life and mind of one of the great intellects of our time. The author, who had access to Said’s private papers, proceeds elegantly and thoughtfully, with depth, intelligence and great empathy to interpret how Said came to be the great scholar and human being that he developed into going into his childhood, the emotional and intellectual influences and how he responded to them helping the reader enter Said’s world and mind and understand both. He lays bare the intellectual and political struggles as well as the emotional difficulties that Said endured in the course of his life and what he made out of them. This is not a biography that is burdened with theory and yet one that helps the reader navigate through Said’s long and impressive oeuvre to better understand and make accessible his writing. It is excellent on how Said’s convictions, both on literature and politics, developed shedding light on Said’s strength and vulnerabilities. It is not only an intellectual biography but one of the total person. Said was a monumental figure and this is a suitably monumental biography of extraordinary scope." --Raja Shehadeh, author of Where the Line is Drawn: Crossing Boundaries in Occupied Palestine

"Among literary critics who emerged in the second half of the last century, Said remains by far the most phosphorescent, a figure globally invoked alongside his intellectual heroes: Gramsci, Lukacs, Sartre, Adorno, Chomsky, Foucault. We who were his students remember a man quick to anger and to empathy; and to impatience with ideas merely expressed, not lived. He was a theoretician among aesthetes and an aesthete among theoreticians. A promiscuous love of literature and music drove him as surely as his heartbroken demand for justice in the world. Professor Brennan’s book is a sensitive, brilliantly readable piece of life-writing that captures the difficult, estimable man we cherished." --Benjamin Taylor, author of The Hue and Cry at Our House

"Edward Said, a major intellectual, prolific author, political thinker (and actor) of formidable guts and subtlety, and gifted pianist, was also a figure of infinite charm and considerable human complexity. Timothy Brennan's outstanding biography somehow does justice to these and other aspects of Said's personality and achievement, and does so in prose of impressive force and clarity. A masterly examination of a singularly rich and multiply engaged life." --Michael Fried, author of What Was Literary Impressionism?

"Brennan, one of Said's former students, offers insight into one of the foremost intellectuals of the postwar period . . .[he] has succeeded in writing an account that is both and act of love and a solid study of a fascinating man."
--David Keymer, Library Journal