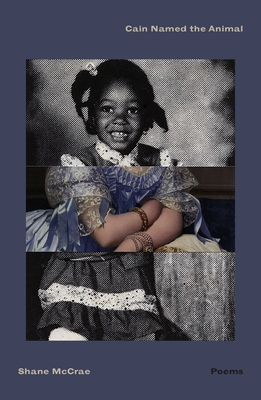 A prophetic new collection of poems from Shane McCrae, “a shrewd composer of American stories" (Dan Chiasson, The New Yorker)

Shane McCrae fashions a world of endings and infinites in Cain Named the Animal. With cyclical, rhythmic lines that create and re-create images of our shared and specific pasts, McCrae's work moves into and through the wounds that we remember and “strains toward a vision of joy” (Will Brewbaker, Los Angeles Review of Books).

Cain Named the Animal expands upon the biblical, heavenly world that McCrae has been building throughout his previous collections; he writes of Eden, of the lost tribe that watched time enter the garden and God rehearse the world, and of the cartoon torments of hell. Yet for McCrae, these outer bounds of our universe are inseparable from the lives and deaths on Earth, from the mundanities and miracles of time passing and people growing up, growing old, and growing apart. As he writes, “God first thought time itself / Was flawed but time was God’s first mirror.”

Shane McCrae is the author of several books of poetry, including In the Language of My Captor, which won the Anisfield-Wolf Book Award for Poetry and was a finalist for the National Book Award, the Los Angeles Times Book Prize, and the William Carlos Williams Award, Sometimes I Never Suffered, which was short-listed for the T. S. Eliot Prize, and his most recent collection, Cain Named the Animal. McCrae is the recipient of a Whiting Award, a National Endowment for the Arts Fellowship, a Lannan Literary Award, and a Guggenheim Fellowship. He teaches at Columbia University and lives in New York City.

"McCrae’s poems possess a self-reflective quality without being burdened by history. As in Beckett and Whitman, repetition generates a self-searching, hypnotic music. His poetry moves freely within the restricted syllabic lines, constructing a wild, vivid dreamworld . . . [Cain Named the Animal] confirms McCrae as one of the most erudite and inventive poets of our time, throwing punches at the English language and its hierarchical traditions." —Kit Fan, The Guardian (UK)

"What [McCrae] observes at the end of 'Worldful,' 'but what life does / Not have to be reduced to be imagined,' is true of any description or summary of the best of these lyrics. Praise is due for their craft, but even more so for their imaginative power." —Michael Autrey, Booklist

"McCrae’s poems allude to literary precursors like Dante, Milton, and the Bible, but the voice is unabashedly of our time . . . By seeking to heal the rift in his own identity, McCrae has listened intently to the literary echoes emanating from the English language and transmuted them through his own dynamic voice." —David Woo, Poetry

"[Shane McCrae] is peer to the peerless . . . You can feel the stage on the page here, poems that even as blotted ink on middle-weight paper seem to have sound." —B. A. Van Sise, New York Journal of Books

"Readers will marvel at McCrae's ability to achieve Miltonic scope with such economy of expression." —Library Journal