An Invitation to Indian Cooking: A Cookbook (Paperback) 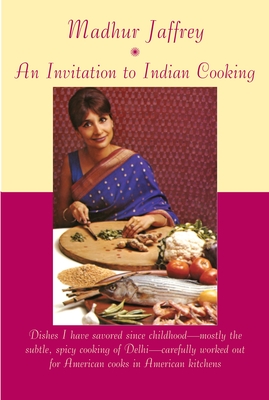 The classic guide to the foods of India—and a James Beard Foundation Cookbook Hall of Fame inductee—from the “queen of Indian cooking” (Saveur) and author of Madhur Jaffrey's Instantly Indian Cookbook and Vegetarian India. The book that introduced the rich and fascinating cuisine of India to America and a landmark work of culinary literature, An Invitation to Indian Cooking makes clear just how extraordinarily subtle, varied, and delicious the food of the subcontinent can be. From formal recipes for parties to the leisurely making of dals, pickles, and relishes, Jaffrey’s “invitation” has proved irresistible for generations of American home cooks.

Madhur Jaffrey is the author of many previous cookbooks—seven of which have won James Beard Awards—and was named to the Who’s Who of Food and Beverage in America by the James Beard Foundation. She is the recipient of an honorary CBE from Queen Elizabeth II for her services to drama and promoting the appreciation of Indian food and culture. She is also an award-winning actress, having won the Silver Bear for Best Actress at the Berlin Film Festival, with numerous major motion pictures to her credit. She lives in New York City.

“The final word on the subject . . . . Perhaps the best Indian cookbook available in English.” —Craig Claiborne, The New York Times

“A volume that had much to do with so many Indian dinner parties and countless curries being prepared in American and British kitchens. Something about [Jaffrey’s] recipes and writing style makes the cuisine seem exotic and enchanting while still entirely doable.” —Serious Eats

“Jaffrey’s graceful writing and fascinating content led me to trust her. . . . [An Invitation to Indian Cooking] invited and seduced me.” —Zanne Stewart, Gourmet