Gorbachev: His Life and Times (Paperback) 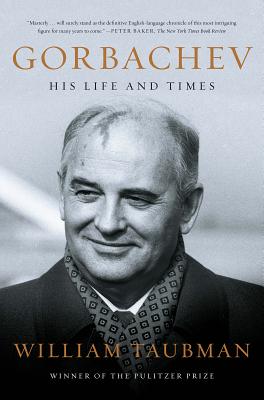 Finalist for the National Book Critics Circle Award in Biography

Longlisted for the Andrew Carnegie Medal for Excellence in Nonfiction

The definitive biography of the transformational Russian leader by the Pulitzer Prize–winning author of Khrushchev.

When Mikhail Gorbachev became the leader of the Soviet Union in 1985, the USSR. was one of the world’s two superpowers. By 1989, his liberal policies of perestroika and glasnost had permanently transformed Soviet Communism, and had made enemies of radicals on the right and left. By 1990 he, more than anyone else, had ended the Cold War, and in 1991, after barely escaping from a coup attempt, he unintentionally presided over the collapse of the Soviet Union he had tried to save. In the first comprehensive biography of the final Soviet leader, William Taubman shows how a peasant boy became the Soviet system’s gravedigger, how he clambered to the top of a system designed to keep people like him down, how he found common ground with America’s arch-conservative president Ronald Reagan, and how he permitted the USSR and its East European empire to break apart without using force to preserve them. Throughout, Taubman portrays the many sides of Gorbachev’s unique character that, by Gorbachev’s own admission, make him "difficult to understand." Was he in fact a truly great leader, or was he brought low in the end by his own shortcomings, as well as by the unyielding forces he faced?

Drawing on interviews with Gorbachev himself, transcripts and documents from the Russian archives, and interviews with Kremlin aides and adversaries, as well as foreign leaders, Taubman’s intensely personal portrait extends to Gorbachev’s remarkable marriage to a woman he deeply loved, and to the family that they raised together. Nuanced and poignant, yet unsparing and honest, this sweeping account has all the amplitude of a great Russian novel.

William Taubman is the Bertrand Snell Professor of Political Science Emeritus at Amherst College. His biography, Khrushchev: The Man and His Era, won the Pulitzer Prize and the National Book Critics Circle Award. He lives in Amherst, Massachusetts.

A masterpiece of narrative scholarship.
— Strobe Talbott - The New York Review of Books

A meticulously researched, clear-eyed volume that will undoubtedly stand for years as the definitive account of the Soviet Union’s last ruler.
— Max Boot - Wall Street Journal

Masterful.… Taubman intimately portrays an epic tragic hero of Sophoclean proportion. Gorbachev is likely to be a subject of interest to future historians for centuries, perhaps millennia.
— Forbes

A superbly researched story of a politician of such decency as to seem, in our more pessimistic, darker moment, almost beyond imagining.
— The New Yorker

William Taubman’s extraordinary new biography, Gorbachev: His Life and Times, is fly-on-the-wall history.… A riveting page-turner.… His book is anything but a solemn academic tome. It’s gripping.

[Taubman] applies a Tolstoyan lens to Russia’s recent history and displays particular sensitivity in his assessment of a life that would prove richer than politics.
— The Economist

William Taubman has now done for Gorbachev what he had previously done for Khrushchev, giving us the full life deeply grounded in the Soviet and Russian archives, here with the added benefit of Gorbachev’s complete cooperation. Perhaps a hundred years from now, when our perspective on Russia’s role in the world has further clarified, another biography will be needed. For now, however, Gorbachev is the closest thing to the final word that history allows.

— Joseph J. Ellis, author of The Cause: The American Revolution and Its Discontents, 1773-1783

Remarkably, the two most memorable leaders of the Soviet Union in the last half of its existence now have the same superb biographer. William Taubman’s Gorbachev, like his Khrushchev, is an extraordinary achievement, full of new information, filled with shrewd judgments, a two-in-a-row triumph in the writing of great lives.

I have had the privilege of knowing many of the great men and women who brought momentous change to the last part of the twentieth century. My friend Mikhail Gorbachev was outstanding among them. So this biography, especially with its attention to his early formative years, is a great addition to our understanding of a key historical period.
— George P. Shultz