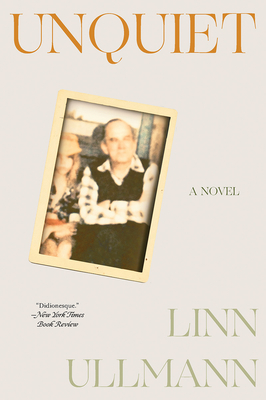 By Linn Ullmann
Email or call for price

A heartbreaking and darkly funny portrait of the intricacies of family life, Unquiet is an elegy of memory and loss, identity and art, growing up and growing old.

Linn Ullmann is the author of six award-winning novels, and her work has been published in more than thirty languages. Unquiet, named a modern classic in Norway, has spent several years on top of bestseller lists in Scandinavia. Ullmann lives in Oslo with her husband and daughter.

Ullmann has formed a book out of the explicit landmarks of her lived life.… The form of the book, however, isn’t documentary, but, rather, fragmentary, the way memory is.… The clarity and lack of fetter is characteristic of [her] way of seeing the world in prose.
— Wyatt Mason - New York Times Magazine

Linn Ullmann has written something of beauty and solace and truth. I don’t know how she managed to sail across such dangerous waters—dangerous artistically as well as personally—without capsizing or making a mistake, but it is a tremendous accomplishment. Funny, graceful, interesting, modest, and most of all a work of the highest moral competence.
— Rachel Cusk, author of the Outline trilogy

A haunting meditation on the shifting moods between women and men over a lifetime of making art; the pains and pleasures of attachment, the boiling emotions of girlhood, the conflicts of motherhood, and the enchantment of a secluded home on the edge of a stormy sea, in which a famous father writes his dreams on the bedside table. I could not put it down.
— Deborah Levy, author of The Cost of Living

This magnificent, elegant work is pure tour de force. It’s part elegy, part elucidation of family love and family mystery, it’s funny, wry, dry, almost untakeably moving, and all of this is held steady in the form by Linn Ullmann’s refusal to swerve from the true, by her understanding of the combined human weakness and human marvelousness in all of us, and above all by her clear eye. It is a wonderful book, unputdownable, one that taps into the sheer electric current between the fictions and the truths that make our life stories. It’s one of the best things I’ve read in a long, long time.
— Ali Smith, author of How to Be Both

[An] exquisite and warm novel.… Among Norway’s contemporary writers, Ullmann might be the finest sentence by sentence.
— John Freeman - LitHub

But even without knowing her parents were world-renowned, Unquiet would resonate powerfully because many of the issues it explores are common to parent-child relationships.… It’s a high-wire act few writers have performed with such grace.
— Dmitry Samarov - Hyperallergic

A brilliant meditation on time, mortality, and the limits of memory.… Gorgeous and heartbreaking.
— Kirkus Reviews (starred review)

Ullman succeeds on every level, blending time, memory, and emotion into a fascinating and intimate portrait that easily evokes the universal sense of love and loss. Highly recommended.
— Library Journal (starred review)

This is a striking book about the enduring love between parents and children, and the fierce attachments that bind them even after death.
— Publishers Weekly (starred review)

Unquiet is a wonderfully absorbing and moving family story told with a directness, naturalness, and grace that can only result from Linn Ullmann’s close attention to the eloquent details of day-to-day life, her honest embrace of herself and the people close to her, and a keen sensitivity to language and the high demands of good writing.

— Lydia Davis, author of The End of the Story

I’ve long admired Linn Ullmann’s fiction, and Unquiet is her masterpiece. Based on her upbringing as the child of two great artists, it is the portrait of complex loves; of a youth divided and inspired by diametrically opposed creative influences; and of the ravages of age. Calm yet fierce, exquisitely rendered, this novel imprints itself indelibly—as if you, too, had been there.