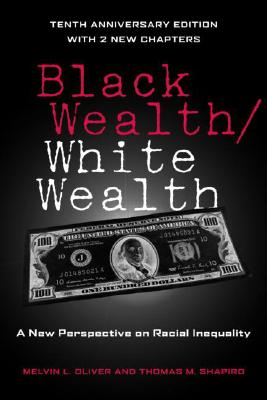 By Melvin Oliver, Thomas Shapiro
Email or call for price.

The award-winning Black Wealth / White Wealth offers a powerful portrait of racial inequality based on an analysis of private wealth. Melvin Oliver and Thomas Shapiro's groundbreaking research analyzes wealth - total assets and debts rather than income alone - to uncover deep and persistent racial inequality in America, and they show how public policies have failed to redress the problem.

First published in 1995, Black Wealth / White Wealth is considered a classic exploration of race and inequality. It provided, for the first time, systematic empirical evidence that explained the racial inequality gap between blacks and whites. The Tenth Anniversary edition contains two entirely new and substantive chapters. These chapters look at the continuing issues of wealth and inequality in America and the new policies that have been launched in the past ten years. Some have been progressive while others only recreate inequality - for example the proposal to eliminate the estate tax.

Compelling and also informative, Black Wealth / White Wealth is not just pioneering research. It is also a powerful counterpoint to arguments against affirmative action and a direct challenge to current social welfare policies that are tilted towards the wealthy.