The Forgotten 500: The Untold Story of the Men Who Risked All for the Greatest Rescue Mission of World War II (Paperback) 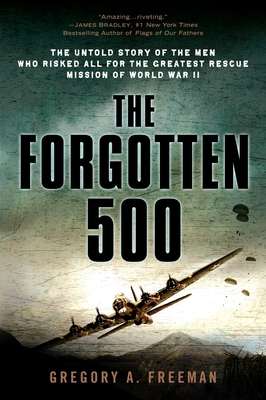 The astonishing, never before told story of the greatest rescue mission of World War II—when the OSS set out to recover more than 500 airmen trapped behind enemy lines in Yugoslavia...

During a bombing campaign over Romanian oil fields, hundreds of American airmen were shot down in Nazi-occupied Yugoslavia. Local Serbian farmers and peasants risked their own lives to give refuge to the soldiers while they waited for rescue, and in 1944, Operation Halyard was born. The risks were incredible. The starving Americans in Yugoslavia had to construct a landing strip large enough for C-47 cargo planes—without tools, without alerting the Germans, and without endangering the villagers. And the cargo planes had to make it through enemy airspace and back—without getting shot down themselves.

Classified for over half a century for political reasons, the full account of this unforgettable story of loyalty, self-sacrifice, and bravery is now being told for the first time ever. The Forgotten 500 is the gripping, behind-the-scenes look at the greatest escape of World War II.

Gregory A. Freeman is an award-winning writer and a leader in the field of narrative nonfiction. Known for books that make a true story read like a gripping, fast-paced novel, his works include The Forgotten 500, The Gathering Wind, Sailors to the End, Troubled Water, and The Last Mission of the Wham Bam Boys. He lives in the Atlanta area.

Praise for The Forgotten 500

“A literary and journalistic achievement of the highest order, a book that illuminates, thrills, and reminds us that heroes sometimes do live among us. It will take your breath away.”—Gregg Olsen, New York Times bestselling author of The Deep Dark

“The daring rescue effort to save hundreds of downed airmen in dangerous enemy territory is an amazing but unknown WWII adventure story. Told in riveting detail for the first time, The Forgotten 500 is a tale of unsung heroes who went above and beyond.”—James Bradley, New York Times bestselling author of Flags of Our Fathers and Flyboys

“The operation’s story is an exciting tale...Evoking the rescuees’ successive desperation, wild hope, and joy, and their gratitude to the Serbians who risked their lives to help, Freeman produces a breathtaking popular account.”—Booklist

“[F]ascinating...full of romance, action, and adventure...This untold story of World War II has finally been told with skill and grace.”—America in WWII magazine

“Greg Freeman has written a riveting account of the greatest escape during World War II. It is a remarkable adventure story of courage and daring that is superbly told.”—Anthony  C. Zinni, General USMC (Retired)

“This is an exciting, powerful story of escape and rescue. It has been buried for too long.”—Tony Koltz, New York Times bestselling author of The Battle for Peace

“[A] gripping, true-life narrative of one of the most heroic and inspiring—but virtually unknown—military operations of World War II....Freeman chronicles it with a master’s touch for detail.  Although this book reads like a fast-paced novel, it is based on scores of probing interviews and meticulous archival research. The Forgotten 500 is destined to become required reading for serious students of the Second World War.”—Malcolm McConnell, #1 New York Times bestselling coauthor of American Soldier