The Martian's Daughter: A Memoir (Paperback) 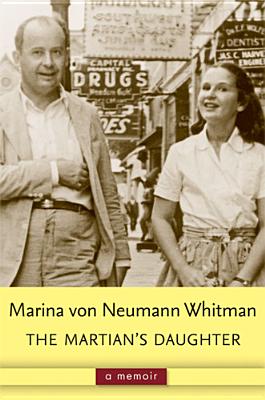 By Marina Whitman
Email or call for price

One of the five Hungarian scientific geniuses dubbed "the Martians" by their colleagues, John von Neumann is often hailed as the greatest mathematician of the twentieth century and even as the greatest scientist after Einstein. He was a key figure in the Manhattan Project; the inventor of game theory; the pioneer developer of the modern stored-program electronic computer; and an adviser to the top echelons of the American military establishment. In The Martian's Daughter, Marina von Neumann Whitman reveals intimate details about the famed scientist and explores how the cosmopolitan environment in which she was immersed, the demanding expectations of her parents, and her own struggles to emerge from the shadow of a larger-than-life parent shaped her life and work.

Unfortunately, von Neumann did not live to see his daughter rise to become the first or highest-ranking woman in a variety of arenas. Whitman became a noted academic during the 1960s and '70s, casting her teaching and writing in the framework of globalization before the word had been invented; became the first woman ever to serve on the President's Council of Economic Advisers and participated actively in U.S. efforts to reshape the international monetary and financial system during the early 1970s; pioneered the role of women on the boards of leading multinational corporations; and became the highest-ranking female executive in the American auto industry in the 1980s. In her memoir, Whitman quotes from personal letters from her father and describes her interactions with such figures as Roger Smith of GM and President Nixon. She also details the difficulties she encountered as an early entrant into a world dominated by men and how she overcame the obstacles to, in her words, "have it all."

Marina von Neumann Whitman is Professor of Business Administration and Public Policy at the University of Michigan.