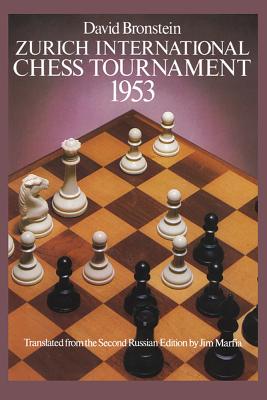 The book of a strong tournament is more than just a games collection. When its participants are the world's strongest players . . . the tournament as a whole represents a step forward in the development of chess creativity. We may take as examples of such tournaments the events at Hastings 1895, St. Petersburg 1914, New York 1924, Moscow 1935, and Groningen 1946. Beyond doubt, Zurich-Neuhausen 1953 deserves a place among them.
David Bronstein ventured this evaluation of Zurich 1953 just three years after the event, in the preface to the first Russian edition of this book. Since that time the 210 games of the legendary tournament have only grown in stature. Most knowledgeable chess players now rate it the greatest tournament since World War II, and possibly the greatest tournament of all time.
In the 1920s Jim Marfia, a talented amateur player, became determined to provide an authoritative English translation of Bronstein's book, a task which occupied him for several years. The complete record of the famous Zurich International Chess Tournament, 1953, is available in English for the first time.
Held to determine a challenger for then World Champion Botvinnik, Zurich 1953 attracted fifteen of the strongest players in the world: Smyslov; Geller; Boleslavsky; Bronstein; Najdorf; Szabo; Keres; Kotov; Gligoric; Reshevsky; Taimanov; Euwe; Petrosian; Averbakh; and Stahlberg.
Almost all the games were hotly contested, and many are masterpieces of the first rank. To mention Euwe-Smylov (round 3), Taimanov-Najdorf (round 4, winner of a brilliancy prize), and Keres-Reshevsky (round 11, one of the most reproduced and analyzed games in chess), is just to touch the tip of the iceberg; there are literally dozens of memorable, innovative games in this volume, including a substantial portion by the author, one of the game's greatest players, who finished tied for second with Keres and Reshevsky, behind the winner Smyslov.
Advanced players will want this book for the games alone. Beginning and intermediate players, concerned more immediately with instruction, will find David Bronstein's annotations not only perceptive and thorough, but also a veritable textbook on how to play the middle game.