The Genealogy of Morals (Paperback) 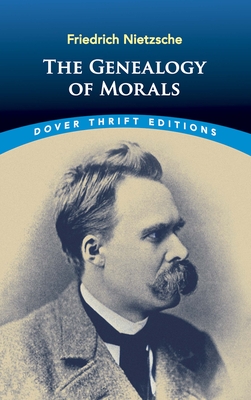 By Friedrich Wilhelm Nietzsche
$4.00
Email or call for price

Written in response to a book on the origins of morality by his erstwhile friend Paul R e, the three essays comprising The Genealogy of Morals -- all three advancing the critique of Christian morality set forth in Beyond Good and Evil -- are among Nietzsche's most sustained and cohesive work.
In the first essay -- starting from a linguistic analysis of words such as good, bad, and evil -- Nietzsche sets up a contrast between what he calls master morality and slave morality and shows how strength and action have often been replaced by passivity and nihilism. The next essay, looking into the origins of guilt and punishment, shows how the concept of justice was born -- and how internalization of this concept led to the development of what people called the soul. In the third essay, Nietzsche dissects the meaning of ascetic ideals.
It is not Nietzsche's intention to reject ascetic ideals, slave morality, or internalized values out of hand; his main concern is to show that culture and morality, rather than being eternal verities, are human-made. Whether or not you agree with all of his conclusions, his writing is of such clarity and brilliance that you will find reading The Genealogy of Morals nothing short of exhilarating.