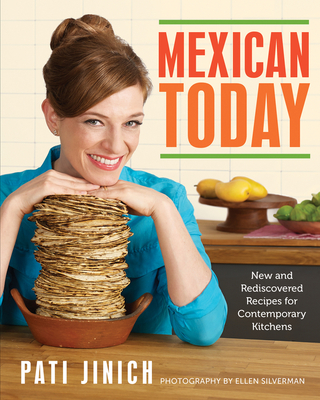 On her PBS TV series, now in its fifth season, as well as in frequent appearances on shows like The Chew, Pati Jinich, a busy mother of three, has shown a flair for making Mexican cooking irresistibly accessible. In Mexican Today, she shares easy, generous dishes, both traditional ones and her own new spins. Some are regional recipes she has recovered from the past and updated, like Miners’ Enchiladas with fresh vegetables and cheese or Drunken Rice with Chicken and Chorizo, a specialty of the Yucatán. “Sweaty” Tacos with ripe tomatoes and cheese are so convenient they’re sold on Mexican streets by bicyclists. Her grandmother’s Cornflake Cookies feel just as contemporary now as they did then.

Pati has “Mexed up” other recipes in such family favorites as Mexican Pizza with Grilled Skirt Steak and Onions. Still other dishes show the evolution of Mexican food north and south of the border, including Mexican Dreamboat Hotdogs and Cal-Mex Fish Tacos with Creamy Slaw. This food will draw everyone together—a family at the end of a working day, a book club, or a neighborhood potluck.  Throughout, Pati is an infectious cheerleader, sharing stores of the food, people, and places behind the recipes.

PATI JINICH (pronounced HEEN-ich) is the host of the three-time James Beard Award-winning PBS series Pati's Mexican Table, now in its tenth season. Named one of the "100 Greatest Cooks of All-Time" by Epicurious and Bon Appétit, she has won a Gracie Award for her television work and is a four-time Emmy nominee and two-time IACP Award winner. She is the resident chef of the Mexican Cultural Institute and has appeared on NPR's Splendid Table and All Things Considered, NBC's Today, CBS's The Talk, ABC's Good Morning America, and Food Network. Born and raised in Mexico City, she lives in Chevy Chase, Maryland, with her husband and three boys.

"Jinich...is nothing if not thorough in making Mexican cuisine accessible to northern chefs. Her cookbook brims with careful instructions and loads of advice on selecting ingredients to create the extraordinary spectrum of flavors offered by classic Mexican cooking." --Booklist —