Empire Made: My Search for an Outlaw Uncle Who Vanished in British India (Hardcover) 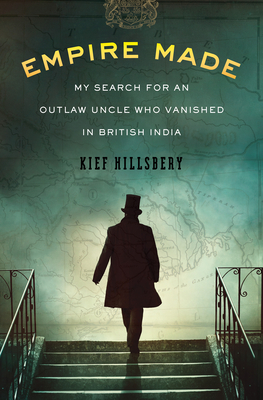 Lost in time for generations, the story of a 19th-century English gentleman in British India—a family mystery of love found and loyalties abandoned, finally brought to light

In 1841, twenty-year-old Nigel Halleck set out for Calcutta as a clerk in the East India Company. He went on to serve in the colonial administration for eight years before abruptly leaving the company under a cloud and disappearing in the mountain kingdom of Nepal, never to be heard from again. While most traces of his life were destroyed in the bombing of his hometown during World War II, Nigel was never quite forgotten—the myth of the man who headed East would reverberate through generations of his family.

Kief Hillsbery, Nigel’s nephew many times removed, embarked on his own expedition, spending decades researching and traveling through India, Pakistan, Afghanistan, and Nepal in the footsteps of his long-lost relation. In uncovering the remarkable story of Nigel’s life, Hillsbery beautifully renders a moment in time when the arms of the British Empire extended around the world. Both a powerful history and a personal journey, Empire Made weaves together a clash of civilizations, the quest to discover one’s own identity, and the moving tale of one man against an empire.

KIEF HILLSBERY is the author of the critically acclaimed novel War Boy. A former contributing editor and columnist for Outside and a former writer for Rolling Stone.

"An honest, pacey portrayal of empire-building at a critical juncture in the Great Game...a fascinating and very surprising read.”—Financial Times

“Hillsbery’s exploration of what happened to his British uncle who went to India in 1841, never to return, makes achingly vivid how difficult it was to escape one’s preordained class and societal expectations in Victorian England… Great details abound… Marvelous insights into the British in India, along with a glimpse into gay life. This has a narrative sweep reminiscent of Christopher Hibbert’s social histories.” –BOOKLIST **Starred Review**

“There are travelers who can’t write and writers who can’t travel. Fortunately for his readers, Kief Hillsbery can do both. Part travelogue, part family memoir, Empire Made is a fine and moving tale, sensitively explored and beautifully written.”
—Justin Marozzi, author of Baghdad: City of Peace, City of Blood