Angels in America: A Gay Fantasia on National Themes (CD-Audio) 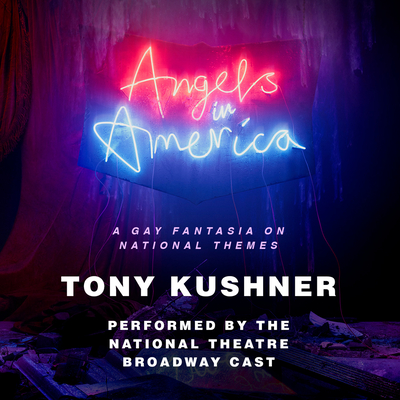 Presenting an original audiobook performance of the Pulitzer Prize-winning play, starring the cast of the National Theatre's 2018 Broadway revival.

In this production, adapted especially for the listening experience, Andrew Garfield, Nathan Lane, and the entire cast recreate their acclaimed performances from the 2018 Tony Award-winning National Theatre revival of Angels in America: A Gay Fantasia on National Themes. With narration by Bobby Cannavale and Edie Falco, and a musical score by Adrian Sutton, this audiobook is a compelling and immersive theatrical listening experience.

A play in two parts, Millennium Approaches and Perestroika, Angels in America: A Gay Fantasia on National Themes is a complex and insightful look into identity, community, justice, and redemption. New Yorkers grapple with life and death, love and sex, and heaven and hell as the AIDS crisis intensifies during a time of political reaction--the Reagan Republican counterrevolution of the 1980s. Published to celebrate the Broadway revival, this is a unique opportunity to hear one of the most honored and timeless plays in American history.

Tony Kushner's plays include Angels in America; A Bright Room Called Day; Hydriotaphia, or the Death of Dr. Browne; The Illusion, adapted from the play by Pierre Corneille; Slavs!; Homebody/Kabul; Caroline, or Change, a musical with composer Jeanine Tesori; and The Intelligent Homosexual's Guide to Capitalism and Socialism with a Key to the Scriptures. He wrote the screenplays for Mike Nichols's film of Angels in America and for Steven Spielberg's Munich and Lincoln. He is the author of three books and the recipient of a Pulitzer Prize, two Tony Awards, three Obie Awards, two Evening Standard Awards, an Olivier Award, an Emmy Award, two Oscar nominations, and the Steinberg Distinguished Playwright Award. He is a member of the American Academy of Arts and Letters. In 2012, he was awarded a National Medal of Arts by President Barack Obama. He lives in Manhattan with his husband, Mark Harris.