The Fall of Richard Nixon: A Reporter Remembers Watergate (CD-Audio) 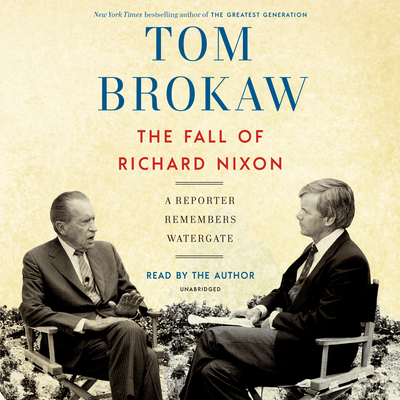 By Tom Brokaw, Tom Brokaw (Read by)
Email or call for price

Bestselling author Tom Brokaw brings readers inside the White House press corps in this up-close and personal account of the fall of an American president.

In August 1974, after his involvement in the Watergate scandal could no longer be denied, Richard Nixon became the first and only president to resign from office in anticipation of certain impeachment. The year preceding that moment was filled with shocking revelations and bizarre events, full of power politics, legal jujitsu, and high-stakes showdowns, and with head-shaking surprises every day. As the country’s top reporters worked to discover the truth, the public was overwhelmed by the confusing and almost unbelievable stories about activities in the Oval Office.

Tom Brokaw, who was then the young NBC News White House correspondent, gives us a nuanced and thoughtful chronicle, recalling the players, the strategies, and the scandal that brought down a president. He takes readers from crowds of shouting protesters to shocking press conferences, from meetings with Attorney General Elliot Richardson and White House Chief of Staff Alexander Haig, to overseas missions alongside Henry Kissinger. He recounts Nixon’s claims of executive privilege to withhold White House tape recordings of Oval Office conversations; the bribery scandal that led to the resignation of Vice President Spiro Agnew and his replacement by Gerald Ford; the firing of Special Prosecutor Archibald Cox; how in the midst of Watergate Nixon organized emergency military relief for Israel during the Yom Kippur War; the unanimous decision of the Supreme Court that required Nixon to turn over the tapes; and other insider moments from this important and dramatic period.

The Fall of Richard Nixon allows readers to experience this American epic from the perspective of a journalist on the ground and at the center of it all.

Praise for The Fall of Richard Nixon

“A divided nation. A deeply controversial president. Powerful passions. No, it’s not what you’re thinking, but Tom Brokaw knows that the past can be prologue, and he’s given us an absorbing and illuminating firsthand account of how Richard Nixon fell from power. Part history, part memoir, Brokaw’s book reminds us of the importance of journalism, the significance of facts, and the inherent complexity of power in America.”—Jon Meacham, Pulitzer Prize–winning author of The Soul of America

Tom Brokaw is the author of seven bestsellers: The Greatest Generation, The Greatest Generation Speaks, An Album of Memories, A Long Way from Home, Boom!, The Time of Our Lives, and A Lucky Life Interrupted. A native of South Dakota, he graduated from the University of South Dakota with a degree in political science. He began his journalism career in Omaha and Atlanta before joining NBC News in 1966. Brokaw was the White House correspondent for NBC News during Watergate, and from 1976 to 1981 he anchored Today on NBC. He was the sole anchor and managing editor of NBC Nightly News with Tom Brokaw from 1983 to 2005. In 2008 he anchored Meet the Press for nine months following the death of his friend Tim Russert. He continues to report for NBC News, producing long-form documentaries and providing expertise during breaking news events. Brokaw has won every major award in broadcast journalism, including two duPonts, two Peabody Awards, and several Emmys. In 2014, he was awarded the Presidential Medal of Freedom. He lives in New York and Montana.

“Tom Brokaw arrived in Washington as the rising young star of broadcast news just as the presidency of Richard Nixon was collapsing. Brokaw has intertwined his own story with Nixon’s in a way that is readable, revealing, and always fascinating.”—Evan Thomas, author of Being Nixon