Off Track: or How I Dropped Out of College and Came to be a Horse Trainer in the 1970s While All My Friends Were Still Doing Drug (Paperback) 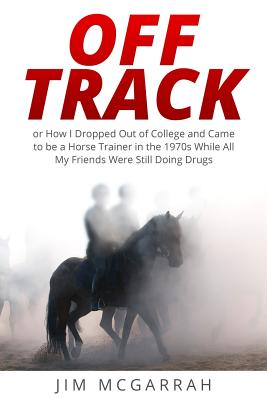 By Jim McGarrah
Email or call for price

Memoir of a Vietnam Vet who returns home and tries to find his bearing, but butts heads with his father and friends and falls into a career of horse training.

Marine, social worker, carpet layer, janitor, bartender, race horse trainer, and college professor, McGarrah lives in Louisville, Kentucky, close enough to Churchill Downs to hear the crowd roar each year at the Kentucky Derby. Jim McGarrah's poems, essays, and stories appear frequently in literary journals such as Bayou Magazine, Breakwater, Cincinnati Review, Chamber Four, Connecticut Review, and North American Review. He is the author of three award-winning books of poetry: Running the Voodoo Down (Elixir Press, 2003); When the Stars Go Dark (Main Street Rag, 2009); and Breakfast at Denny's (Ink Brush Press, 2013). His memoir of war, A Temporary Sort of Peace (Indiana Historical Society Press, 2007) won the national Eric Hoffer Legacy Non-Fiction Award, and the sequel, The End of an Era, was published in 2011. He is editor, along with Tom Watson, of the anthology Home Again: Essays and Memoirs from Indiana and the former managing editor of Southern Indiana Review.