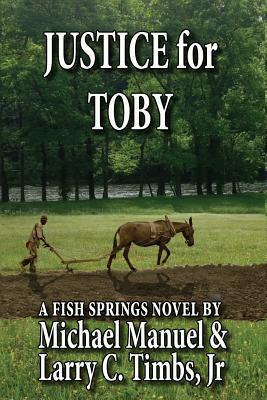 The year is 1883. The place is Fish Springs-a remote mountain community in rugged East Tennessee. The grisly murder of a black man and the pursuit of his killer in predominantly white Carter County rekindle old hatred and bigotry. Will the victim's killer be caught and brought to justice? Or will the white power structure in this mountain community dismiss the murder as just another Negro who got out of line and deserved to die? The Ku Klux Klan gets involved, and the accused murderer hires a take-no-prisoners, crafty defense attorney. Witnesses are threatened, property is destroyed and the well-intentioned but outmanned county sheriff has his hands full.Read all about it-and the climactic ending-in Justice for Toby.

Michael Manuel finished high school on the Mississippi Gulf Coast and attended The University of Southern Mississippi. He and his wife Joyce live on a mountain, with their two cats, overlooking Watauga Lake near Hampton, Tennessee. They like to hike on the Appalachian Trail just below the house and kayak on the lake. The Manuels each have a daughter. Justice for Toby co-authored with Larry C. Timbs Jr. is his second published novel and is a sequel to their first, Fish Springs: Beneath the Surface, published in 2014. Michael is also a screen writer and has written screenplays for both novels. Michael says, "life is good." Larry C. Timbs, Jr is a journalist, a retired journalism professor and a Vietnam-era USAF veteran. His roots are in East Tennessee, but he worked for 27 years at Winthrop University in Rock Hill, S.C. Fish Springs: Beneath the Surface, published in 2014 with co-author Michael Manuel, was his first novel. Justice for Toby is his second novel. Growing up, he heard many colorful stories about Fish Springs-a mountain community in East Tennessee now almost entirely covered by Watauga Lake-from his father, Lawrence C. Timbs, who died at the age of 90 in January 2012. His father and many of his ancestors were born and raised in Fish Springs-the setting for Justice for Toby. Larry blogs at: http: //larrytimbs.blogspot.com For more details about the authors and the story, see the authors' website: www.fishspringsnovel.com