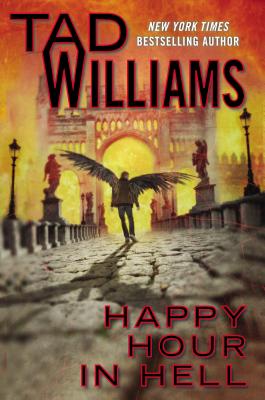 I’ve been told to go to Hell more times than I can count. But this time I’m actually going.

My name’s Bobby Dollar, sometimes known as Doloriel, and of course, Hell isn’t a great place for someone like me—I’m an angel. They don’t like my kind down there, not even the slightly fallen variety. But they have my girlfriend, who happens to be a beautiful demon named Casimira, Countess of Cold Hands. Why does an angel have a demon girlfriend? Well, certainly not because it helps my career.

She’s being held hostage by one of the nastiest, most powerful demons in all of the netherworld—Eligor, Grand Duke of Hell. He already hates me, and he’d like nothing better than to get his hands on me and rip my immortal soul right out of my borrowed but oh-so-mortal body.

But wait, it gets better! Not only do I have to sneak into Hell, make my way across thousands of miles of terror and suffering to reach Pan- demonium, capital of the fiery depths, but then I have to steal Caz right out from under Eligor’s burning eyes and smuggle her out again, past demon soldiers, hellhounds, and all the murderous creatures imprisoned there for eternity. And even if I somehow manage to escape Hell, I’m also being stalked by an undead psychopath named Smyler who’s been following me for weeks. Oh, and did I mention that he can’t be killed?

So if I somehow survive Hell, elude the Grand Duke and all his hideous minions and make it back to the real world, I’ll still be the most hunted soul in Creation. But at least I’ll have Caz. Gotta have something to look forward to, right?

So just pour me that damn drink, will you? I’ve got somewhere to go.

Tad Williams is a California-based fantasy superstar.  His genre-creating (and genre-busting) books have sold tens of millions worldwide.  His considerable output of epic fantasy and epic science fiction series, fantastical stories of all kinds, urban fantasy novels, comics, scripts, etc., have strongly influenced a generation of writers.  Tad always has several secret projects on the go. 2016 will see the debut of a number of them; March 2017 brings The Witchwood Crown, the first volume in the long-awaited return to the world of the Memory, Sorrow & Thorn novels. Tad and his family live in the Santa Cruz mountains in a suitably strange and beautiful house.

“When I heard that Tad Williams was writing an urban fantasy novel, I got all tingly. Now I’ve read it, and it’s even better than I’d dared to hope. It’s snarky, fast-paced, and above all, original. You should be tingly, too.”
—Patrick Rothfuss, #1 NYT bestselling author of The Name of the Wind

“A noir fantasy series with a dark and thrilling story of Heaven and Hell battling for human souls. Exhilarating action, fascinating characters, and high stakes will leave the reader both satisfied and eager for the next installment.”
—Publishers Weekly, Starred Review

“With a hint of detective noir, a colorful cast of characters and fast-paced, witty dialogue, The Dirty Streets of Heaven is a fantastically fun read.”
—Amazon.co.uk Editors’ Pick