The Book Keeper: A Memoir of Race, Love, and Legacy (Hardcover) 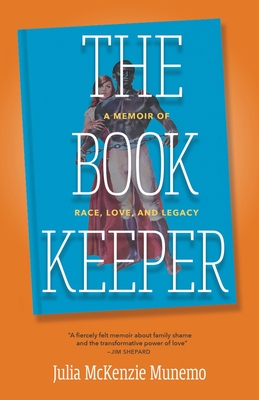 By Julia McKenzie Munemo
Email or call for price

“A fiercely felt memoir about family shame and the transformative power of love even as it’s also an ongoing meditation on privilege and race in twenty-first-century America. This is a debut striking in its empathetic imagination, observational acuity, and emotional intelligence.” — Jim Shepard, author of Like You’d Understand, Anyway.

In a memoir that’s equal parts love story, investigation, and racial reckoning, Munemo unravels and interrogates her whiteness, a shocking secret, and her family’s history.

Julia McKenzie Munemo went to Bard College before earning a master’s in education at Harvard. After building a career as a freelance writer, she earned an MFA in creative nonfiction from the Stonecoast Program at the University of Southern Maine. She lives with her family in western Massachusetts.

“A carefully crafted memoir for all readers who care about family connections and legacies and about multiracial identity in an increasingly complex world.”—Library Journal

“The Book Keeper is a fiercely felt memoir about family shame and the transformative power of love even as it’s also an ongoing meditation on privilege and race in twenty-first century America. This is a debut striking in its empathetic imagination, observational acuity, and emotional intelligence.”—Jim Shepard, author of Like You'd Understand, Anyway

“In lucid and unadorned prose, Munemo gives focus to her powerful material, which feels essential to the larger cultural conversation about race in America. In tracing her own journey from reckoning with to ownership of her family’s past, she offers a unique and important perspective that I haven’t seen before in memoir. The Book Keeper does what the best nonfiction does: through a unique and deeply felt personal story, it brings larger cultural and historic threads to light with nuance and resonance.”—Domenica Ruta, author of With or Without You

“Julia McKenzie Munemo has written an extraordinary book: about love, inheritance, race, loss and revelation. By unpacking the story of her father’s past—as a writer of racially charged pulp fiction—she in turns unpacks the story of herself, her husband, and the future of her children. Rarely does one come across a story as intricately blended and obviously unified as Munemo’s. This story, neatly told, with keen narrative syncopation, stands not only as a multi-generational interrogation into a writer’s unfurling past, but also as a fable about the complexity of race in America.”—Jaed Coffin, author of Roughhouse Friday

“Julia McKenzie Munemo’s The Book Keeper is a generous, intimate love story across continents and cultures, as well as an incisive social commentary on America’s racial divide. What, The Book Keeper asks, can racial progress possibly look like in a country where white liberals so willingly put on blinders every day? And how, in these tumultuous times, can a mother of two black boys tell her children they are safe? This is an urgent, crucial inquiry into what it means to mourn and to forgive and to hope.”—Susan Conley, author of The Foremost Good Fortune