Dirt Road Revival: How to Rebuild Rural Politics and Why Our Future Depends On It (Hardcover) 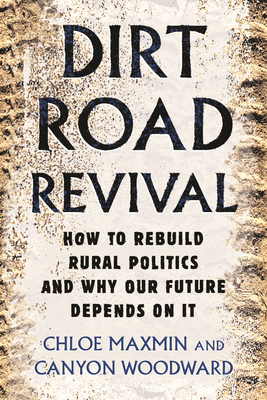 This urgent rallying cry shows how Democrats can win back and empower overlooked communities that have been pushing politics to the right—and why long-term progressive political power depends on it.

Through 2 successful elections in rural red districts that few thought could be won by a Democrat, twentysomethings Maine state senator Chloe Maxmin (D-District 13) and campaign manager Canyon Woodward saw how the Democratic Party has focused for too long on the interests of elite leaders and big donors, forcing the party to abandon the concerns of rural America—jeopardizing climate justice, racial equity, economic justice, and more. Dirt Road Revival looks at how we got here and lays out a road map for progressive campaigns in rural America to build an inclusive, robust, grassroots politics that fights for equity and justice across our country.

First, Maxmin and Woodward detail how rural America has been left behind. They explore rural healthcare, economic struggle, brain drain, aging communities, whiteness and racism, education access, broadband, Big Agriculture, and more. Drawing on their own experiences, they paint a picture of rural America today and pinpoint the strategic failures of Democrats that have caused the party to lose its rural foothold.

Next, they tell the story of their successful campaigns in the most rural county in the most rural state in the nation. In 2018, Maxmin became the only Democrat to ever win Maine House District 88 and then unseated the highest-ranking Republican in Maine —the Senate Minority Leader—in 2020, making her the youngest woman senator in Maine’s history.

Finally, Maxmin and Woodward distill their experiences into concrete lessons that can be applied to rural districts across the country to build power from the state and local levels on up. They lay out a new long-term vision for Democrats to rebuild trust and win campaigns in rural America by translating progressive values to a rural context, moving beyond the failed strategies of establishment consultants and utilizing grassroots-movement organizing strategies to effectively engage moderate rural voters.

Chloe Maxmin, hailing from rural Maine, is the youngest woman ever to serve in the Maine State Senate, at 29 years old. She was elected in 2020 after unseating a two-term Republican incumbent and (former) Senate Minority Leader. In 2018, she served in the Maine House of Representatives after becoming the first Democrat to win a rural conservative district. Follow her on Twitter (@chloemaxmin).

Canyon Woodward was born, raised, and homeschooled in the Appalachian Mountains of rural North Carolina and the North Cascades of Washington. He was the campaign manager for Chloe Maxmin’s successful 2018 and 2020 campaigns. He earned an honors degree in social studies from Harvard College, where the bulk of his education took place outside of the classroom organizing to get Harvard to divest from fossil fuels. Canyon is also an avid trail runner and potter.

“The book is a lucid look at rural America, and reads as a thrilling political story, told with warmth and smarts.”
—The Boston Globe

“They have demonstrated a commitment to spending time and resources to not only win over rural voters, but to materially improve their lives. It’s time for other Democrats to take note. Rural America is winnable, but to get there, progressives will need to throw out the old roadmap and follow Maxmin and Woodward down this dirt road.”
—Skylar Baker-Jordan, The Daily Yonder

"A memoir and manual of progressive politicking, it is also “a tough-love letter to the Democratic Party,” which has emphatically lost its way around such precincts."
—Harvard Magazine

“As someone who’s spent almost his whole life in rural America, both red and blue counties, I’m not sure I’ve read a more loving and realistic account of dirt road country. And as someone with a keen interest in American politics, I’m certain I’ve never read a more gripping (and practical) account of how to win elections than Dirt Road Revival. Not many political books make you both weep a little and then stand up and cheer—but this will!”
—Bill McKibben, author of The Flag, the Cross, and the Station Wagon: A Graying American Looks Back at His Suburban Boyhood and Wonders What the Hell Happened

“In a story told with urgency and passion, Maxmin and Woodward offer a practical playbook for anyone who wants to get into politics to achieve a better future for those who have been left behind. They show us that rural communities are moral communities that respond more to personal stories and values over policies. Building trusting relationships is the key and this takes time and effort and demands humility and a willingness to learn, but the future of American politics depends on it. The Democratic Party—indeed, all America—must take heed, and Dirt Road Revival offers us a path forward. This is a wonderful, powerful book—and one of the most hopeful I’ve read about a possible future for American politics.”
—Robert B. Reich, former US secretary of labor and author of Saving Capitalism: For the Many, Not the Few

“Dirt Road Revival offers a unique and compelling blend of rigorous research, political expertise, and personal storytelling. Maxmin and Woodward open up about their own experiences and adventures, showing their passion for rural America and the people who sustain it, generation after generation. Dirt Road Revival builds bridges across fractious political divides, combining clear-eyed, practical reasoning with honest assessment and empathetic observation. This book will inspire readers to believe in the possibility of rural revival and motivate them to act now.”
—Jennifer M. Silva, author of We’re Still Here: Pain and Politics in the Heart of America

“If bridge builders like Chloe and Canyon could be cloned, rural America would experience a political renaissance. Their empathetic, homespun ‘politics as unusual’ depicted in Dirt Road Revival is exactly what our country needs.”
—Erica Etelson, cofounder of the Rural Urban Bridge Initiative and author of Beyond Contempt: How Liberals Can Communicate Across the Great Divide

“This is a beyond-timely tough-love letter to the Democratic Party, helpful, consequential, brilliant. Read it and pass the book and message on—quickly!”
—Arlie Hochschild, author of Strangers in Their Own Land: Anger and Mourning on the American Right

“Dirt Road Revival is exactly what you want it to be: a fast-moving political road trip, through the winding back roads of deep-red rural America, to a joyful destination that will have you leaping to your feet and lunging for the collection plate. Maxmin and Woodward share the driving as generously as their hard-won wisdom. Along the way, they lay out a detailed and powerful map for transforming electoral campaigning in the United States. If enough insurgent politicians follow them down the road they’re traveling, it could lead to a progressive super-majority across the country.”
—Naomi Klein, author of On Fire and The Shock Doctrine

“Chloe and Canyon did not win because they knew it all—they won because they listened to and believed in rural voters and the stories they told them at the doors and along the many dirt roads they traveled. Dirt Road Revival explains how we got here as a party—losing ground every cycle—and the road we can take to start connecting with rural voters again. It’s our job as Democrats not to come in with capes but rather to do exactly what Dirt Road Revival lays out—deeply care about the voters you are looking at in the eye, advocate with them and never back down from a fight. It is exactly that fighting spirit that earns respect from rural folks and starts to win back their hearts and their votes.”
—Jane Kleeb, author of Harvest the Vote: How Democrats Can Win Again in Rural America

“‘Things move at the speed of relationship in rural America,’ write Chloe Maxmin and Canyon Woodward in their groundbreaking book Dirt Road Revival. Their pragmatic vision shows us why the pastoral and wilder quarters of America cannot be so easily categorized. We see how rural communities can become the bedrock of a transformational politics that can speak to the nuances and complexities of this moment in time.  If the open space of democracy is to remain open, this spirited book is going to be required reading. Dirt Road Revival moves progressive grassroots organizing into the practice of deep listening, the secret of radical leadership.”
—Terry Tempest Williams, author of Erosion: Essays of Undoing