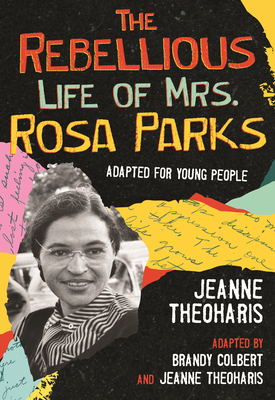 
The basis for the documentary of the same name executive produced by award-winning journalist Soledad O’Brien. The Rebellious Life of Mrs. Rosa Parks premieres on Peacock on October 19.

Now adapted for readers ages 12 and up, the award-winning biography that examines Parks’s life and 60 years of radical activism and brings the civil rights movement in the North and South to life

Rosa Parks is one of the most well-known Americans today, but much of what is known and taught about her is incomplete, distorted, and just plain wrong. Adapted for young people from the NAACP Image Award–winning The Rebellious Life of Mrs. Rosa Parks, Jeanne Theoharis and Brandy Colbert shatter the myths that Parks was meek, accidental, tired, or middle class. They reveal a lifelong freedom fighter whose activism began two decades before her historic stand that sparked the Montgomery bus boycott and continued for 40 years after. Readers will understand what it was like to be Parks, from standing up to white supremacist bullies as a young person to meeting her husband, Raymond, who showed her the possibility of collective activism, to her years of frustrated struggle before the boycott, to the decade of suffering that followed for her family after her bus arrest. The book follows Parks to Detroit, after her family was forced to leave Montgomery, Alabama, where she spent the second half of her life and reveals her activism alongside a growing Black Power movement and beyond.

Because Rosa Parks was active for 60 years, in the North as well as the South, her story provides a broader and more accurate view of the Black freedom struggle across the twentieth century. Theoharis and Colbert show young people how the national fable of Parks and the civil rights movement—celebrated in schools during Black History Month—has warped what we know about Parks and stripped away the power and substance of the movement. The Rebellious Life of Mrs. Rosa Parks illustrates how the movement radically sought to expose and eradicate racism in jobs, housing, schools, and public services, as well as police brutality and the over-incarceration of Black people—and how Rosa Parks was a key player throughout.

Rosa Parks placed her greatest hope in young people—in their vision, resolve, and boldness to take the struggle forward. As a young adult, she discovered Black history, and it sustained her across her life. The Rebellious Life of Mrs. Rosa Parks will help do that for a new generation.

Jeanne Theoharis is Distinguished Professor of Political Science at Brooklyn College of City University of New York and the author or coauthor of numerous books and articles on the civil rights and Black Power movements and the contemporary politics of race in the US. Her books include The Rebellious Life of Mrs. Rosa Parks (winner of a 2014 NAACP Image Award) and A More Beautiful and Terrible History (winner of the 2018 Brooklyn Public Library Literary Prize for Nonfiction). Connect with her on Twitter (@JeanneTheoharis).

Brandy Colbert is the award-winning author of several books for children and teens, including The Only Black Girls in Town, The Voting Booth, and the Stonewall Book Award winner Little & Lion. She is the cowriter of Misty Copeland’s Life in Motion young readers’ edition. Her books have been chosen as Junior Library Guild selections and have appeared on many best-of lists, including the American Library Association’s Best Fiction for Young Adults. She is on faculty at Hamline University’s MFA program in writing for children and lives in Los Angeles.

“A nuanced exploration of a woman with a lifelong commitment to social change.”
—Kirkus Reviews, Starred Review

“Exhaustively researched . . . . a powerful, eye-opening account and a valuable assessment of how historical events and figures can be manipulated, reduced, or embellished to serve the status quo. Neither teachers nor students could possibly expect more from a text.”
—Eleanor J. Bader, The Progressive

“Assign this book in the high school curriculum. Organize a Black Lives Matter teen book club to discuss this book. Give this book as a gift to the young person in your life. Now, perhaps more than ever, we need the real story of Rosa Parks.”
—Melissa Harris-Perry

“To truly honor Mrs. Rosa Parks is to set the record straight. She was not an accidental heroine or just a tired old lady; she was a lifelong rebellious freedom fighter in every sense of the word. Theoharis has captured the beauty and complexity of Mrs. Parks’s life. Deeply researched and engaging, this rich chronicle of Mrs. Parks’s life is a page-turner for adults and youth alike. Theoharis and Colbert have told Mrs. Parks’s life with so much love, care, and truth telling. Bravo!”
—Bettina L. Love, author of We Want to Do More Than Survive: Abolitionist Teaching and the Pursuit of Educational Freedom

“Rosa Parks is one of the few people that young people often get to learn about from the civil rights movement—and yet the story they learn usually obscures the most valuable lessons of her life. The Rebellious Life of Mrs. Rosa Parks is the most effective tool I have ever used to deepen my students’ understanding of her life—the real Rosa Parks was a racial justice activist in the North and the South; an organizer against lynching and sexual assault; a mentor who empowered young people to become change makers. My students couldn’t put the book down because with every page they realized that the traditional story they had been taught about her life wasn’t true—and that the real story was so much more captivating, energizing, and instructive for how to challenge racial and social injustice. No secondary American history course is complete without this book.”
—Jesse Hagopian, high school Ethnic studies teacher and co-editor of Black Lives Matter at School: An Uprising for Educational Justice

“Mrs. Parks’s ‘rebellious’ life always challenged inequality and injustice, even before she refused to give up her seat on a Montgomery, Alabama, bus in 1955. This revealing life story introduces readers to a woman whose courage and vision we can all emulate. Above all else, Mrs. Parks believed that young people would carry the civil rights movement forward, and Theoharis and Colbert show how to do just that through a thrillingly vivid account of how one woman learned to do her part to change the world.”
—Martha S. Jones, author of Vanguard: How Black Women Broke Barriers, Won the Vote, and Insisted on Equality for All

“In a moving work that documents Rosa Parks’s misunderstood role within the civil rights movement, Theoharis and Colbert bring the fast moving dynamism of the movement’s history to life. The Rebellious Life of Mrs. Rosa Parks rescues Rosa Parks from the mythologies of civil rights lore by instead situating her within the long twentieth-century Black Freedom struggle, both North and South, as an activist and an organizer. Highly accessible and eminently readable, this book is retooling with the next generation of would-be activists with the politics and history that can help them forge new paths in the ongoing struggle to make Black lives matter.”
—Keeanga-Yamahtta Taylor, author of From #BlackLivesMatter to Black Liberation

“Finally, a book about the real Rosa Parks—the Rosa Parks who was a lifelong activist, a tireless organizer, and who did so much more than refuse to give up her seat on that bus in Montgomery, Alabama. In story after story, Jeanne Theoharis and Brandy Colbert breathe life into the rebellious Mrs. Rosa Parks, a fighter for justice who will intrigue and inspire young people. And for all of us who want to teach honestly about Rosa Parks and the civil rights movement, this is an essential resource.”
—Bill Bigelow, curriculum editor, Rethinking Schools, and co-director, Zinn Education Project

“The Rebellious Life of Mrs. Rosa Parks offers young readers a detailed exploration of an iconic freedom fighter. In clear and moving prose, Theoharis and Colbert reintroduce a woman who spent the majority of her life fighting on behalf of Black people and women. Young readers will learn that while Rosa Parks is most widely known for her courage connected to the Montgomery bus boycott, her story really represents a lifetime of fierce commitment to social justice.”
—Erica Armstrong Dunbar, author of Never Caught: The Story of Ona Judge