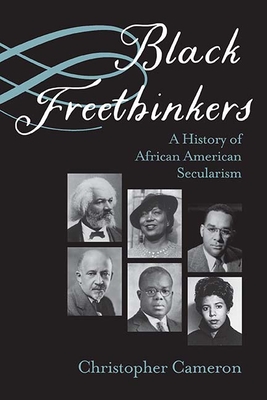 By Christopher Cameron
Email or call for price

Black Freethinkers argues that, contrary to historical and popular depictions of African Americans as naturally religious, freethought has been central to black political and intellectual life from the nineteenth century to the present. Freethought encompasses many different schools of thought, including atheism, agnosticism, and nontraditional orientations such as deism and paganism.

Christopher Cameron suggests an alternative origin of nonbelief and religious skepticism in America, namely the brutality of the institution of slavery. He also traces the growth of atheism and agnosticism among African Americans in two major political and intellectual movements of the 1920s: the New Negro Renaissance and the growth of black socialism and communism. In a final chapter, he explores the critical importance of freethought among participants in the civil rights and Black Power movements of the 1960s and 1970s.

CHRISTOPHER CAMERON is an associate professor of history at the University of North Carolina at Charlotte. He is the founder of the African American Intellectual History Society, the author of To Plead Our Own Cause: African Americans in Massachusetts and the Making of the Antislavery Movement, and a coeditor of New Perspectives on the Black Intellectual Tradition (Northwestern, 2018).

“Cameron offers a compelling survey of African American freethought across two centuries. Rather than treating secularism as a regulatory discourse of modern statecraft, Cameron unpacks the alienations, arguments, and aspirations of black secularists themselves. He brings depth and clarity to an aspect of African American religious history rarely given the sustained attention it deserves.” —Leigh Eric Schmidt, author of Hearing Things: Religion, Illusion, and the American Enlightenment

“In African American intellectual history, religious skepticism, agnosticism, atheism, and secular humanism have long been lost in the shadow of the black church. Taking a closer look at the evidence, Cameron shows that the experience of slavery and the degradations of proslavery Christianity also led some enslaved and free blacks in the nineteenth century to varieties of unbelief. This tradition laid a foundation for the next century, from the Harlem Renaissance to the Black Power movement and beyond. With deft readings of a host of fascinating figures, Cameron shows how black freethinkers made important interventions in American culture.” —Christopher Grasso, author of Skepticism and American Faith: From the Revolution to the Civil War

"Real scholarship on this largely ignored piece of American heritage is long overdue. The work of author and professor Christopher Cameron is now giving that history the platform it deserves." —American Atheist


"Relying heavily on the writings and speeches of African American freethinkers such as Frederick Douglass, W. E. B. Du Bois, A. Philip Randolph, Zora Neale Hurston, James Baldwin, Richard Wright, and Alice Walker, the book compellingly articulates an important strain in American intellectual and religious development. The author supplements these primary sources with a range of manuscripts, newspapers, and newsletters, and an expansive secondary literature . . . the intersection between freethinkers' thought and other intellectual strains, such as feminism, socialism, and communism, is also well documented." —T. F. Armstrong, formerly, Ministry of Higher Education and Scientific Research, UAE, CHOICE