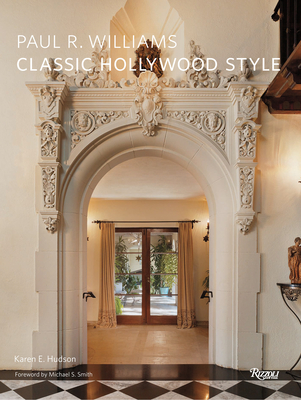 Among the most celebrated architects of his generation, Williams was also the first African-American member of the American Institute of Architects, and he was deeply involved in the black community in Los Angeles and in African-American affairs nationally. Williams moved among many worlds, and with celebrity clients such as Frank Sinatra, Lucille Ball and Desi Arnaz, Tyrone Power, and Barbara Stanwyck, as well as clients who made Hollywood run behind the scenes, not to mention members of Los Angeles high society, Williams left his mark in the city’s most glamorous and exclusive enclaves—Beverly Hills, Brentwood, Bel Air, and the Hollywood Hills.

Paul R. Williams: Classic Hollywood Style is a dazzling tour of this prolific architect’s most spectacular houses, by his granddaughter Karen Hudson, with a special focus on their roles not only as places for high living but also as venues for world-class entertaining.

Karen E. Hudson is Paul Williams’ granddaughter, an owner of one of his homes, and the author of Paul R. Williams Architect. A third-generation Angeleno, she chronicles the African-American experience in Los Angeles in writings and photographs.

"This highly anticipated monograph celebrates the inspiring life and works of architect Paul R. Williams. He became a master of many architectural idioms during his 60-year career and defined what gracious living meant for the mid century's rising Hollywood elite, all while breaking barriers as the first Black member of the American Institute of Architects. This tour of and reflection on Williams's most iconic spaces is written by his granddaughter and features exclusive full-color photography that will make you return to its pages over and over again." —VERANDA.COM