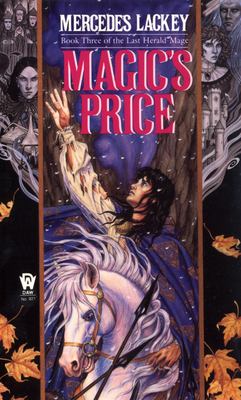 By Mercedes Lackey
Email or call for price

This is book number 3 in the Last Herald-Mage series.

Valdemar—the once-peaceful kingdom protected by the magic of its Herald-Mages—is now besieged on all fronts. The king lies near death, the neighboring land of Karse wages a relentless war against Valdemar, and the forces led by a master of dark forbidden magic are massing to strike the final devastating blow against the kingdom.

And Vanyel, the most powerful Herald-Mage Valdemar has even known, has become the primary target of the evil which is reaching out to poison all the land.

With all his fellow mages slain, Vanyel alone remains to defend his people against the dark master’s army. Yet a dream vision has revealed to Vayel the fate which awaits should he and his Companion Yfandes take up the dark master’s challenge.

And if either Vanyel or Yfandes falters, the dream will become a horrifying reality in which both Valdemar and its last Herald-Mage must pay the ultimate price.

Mercedes Lackey is a full-time writer and has published numerous novels and works of short fiction, including the best-selling Heralds Of Valdemar series. She is also a professional lyricist and a licensed wild bird rehabilitator. She lives in Oklahoma with her husband, artist Larry Dixon, and their flock of parrots. She can be found at mercedeslackey.com.

"Lackey has written another intensely wrought, finely detailed story of heroic victims struggling to do the best with their fate. Vanyel’s magical strengths are countered by his very human insecurities." —VOYA

"Lackey’s characterization, plotting, and wit are all of a high order. A real page-turner for any fantasy collection." —Booklist

"Emotionally tense and full of drama and magic." —Locus

"In Vanyel, [Lackey] has created her most empathetic male character to date, making our emotions run high as he meets his fate. And best of all, the very last plot twist is one of haunting beauty that will touch your heart." —RT Reviews

"In this trilogy, Lackey reaches an intensity she had only begun to achieve.... The story of Vanyel is darker than her earlier books, and the pace is unrelenting." —American Fantasy Magazine