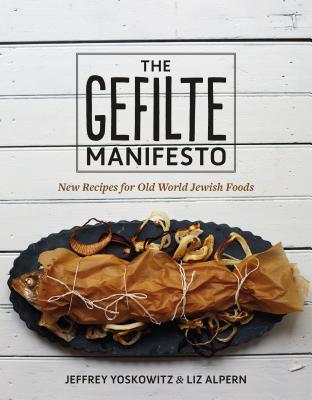 By Jeffrey Yoskowitz, Liz Alpern
Email or call for price

The founders of the world-famous Gefilteria revitalize beloved old-world foods with ingenious new approaches in their debut cookbook, The Gefilte Manifesto.

Liz Alpern and Jeffrey Yoskowitz are on a mission to reclaim and revolutionize Ashkenazi cuisine. Combining the inventive spirit of a new generation and respect for their culinary tradition, they present more than a hundred recipes pulled deep from the kitchens of Eastern Europe and the diaspora community of North America. Their recipes highlight the best of Ashkenazi home and storefront cuisine, tapping into the enduring Jewish values of resourcefulness and seasonality.

Dishes like Spiced Blueberry Soup, Kasha Varnishkes with Brussels Sprouts, and Sweet Lokshen Kugel with Plums celebrate flavors passed down from generation to generation in recipes reimagined for the contemporary kitchen. Other recipes take a playful approach to the Old World, like Fried Sour Pickles with Garlic Aioli and Sour Dill Martinis.

The Gefilte Manifesto is more than a cookbook. It’s a call to action, a reclamation of time-honored techniques and ingredients, from the mind-blowingly easy Classic Sour Dill Pickles to the Crispy Honey-Glazed Chicken with Tsimmes. Make a stand. Cook the Manifesto. The results are radically delicious.

Jeffrey Yoskowitz, cofounder of The Gefilteria, trained as a pickler at Adamah Farm, where he fell in love with the art of lacto-fermentation, and has worked in the food world as an entrepreneur and a consultant for food businesses, as well as a writer. He grew up visiting New York’s finest Jewish food institutions and has written on food and culture for The New York Times, The Atlantic, Slate, and Gastronomica. He frequently speaks to audiences around the world and teaches workshops about Jewish food and culture.

Liz Alpern, cofounder of The Gefilteria, , got her start in the Jewish food world working with acclaimed cookbook author Joan Nathan. She curates and cooks for pop-up events and gives lectures and hands-on classes around the globe about Jewish food and culture. She holds an MBA from the Zicklin School of Business at CUNY Baruch College. She has been featured in Forbes’ 30 Under 30 list for food and wine, as well as in The New Yorker, The New York Times, Saveur, and The Wall Street Journal.

"This might be the cookbook of the year." —Dara Moskowitz Grumdahl, Off The Menu Podcast

“The Gefilte Manifesto is a comprehensive guide to contemporary Jewish cooking complete with sharp writing, beautiful photography, and robust flavor. Jeffrey and Liz have figured out how to take Bubbe’s cooking and pass the baton to the modern-day cook.” —Michael Solomonov, chef of Zahav and author of Zahav: A World of Israeli Cooking

“I can’t say enough good things about this bright, compelling offering that beautifully manages to frame traditional Ashkenazi cuisine with perfect twists and newness. It’s no small feat to retain the character of an old, emotionally held culinary culture while imparting fresh life to the standards. Jeffrey and Liz have nailed it not only with outstanding recipes but also with history and stories and context, impeccably written. The passion of yet another generation carries it forward; we Jewish mothers can be collectively entranced, inspired, and proud.” —Mollie Katzen, author of The Heart of the Plate: Vegetarian Recipes for a New Generation

“What a gorgeous book! The Gefilte Manifesto is simultaneously an homage to cultural traditions and a reclaiming of these traditions to make them relevant to our contemporary lives. With so many of us searching for ways to feel more connected to food, this book is a great resource. I look forward to sharing it with family and friends!” —Sandor Ellix Katz, author of The Art of Fermentation and Wild Fermentation

“The Gefilte Manifesto is a delightful book. I am so proud of this next generation that is further informing our palates with the fermentation and preserving techniques of our forefathers and -mothers.” —Joan Nathan, author of King Solomon’s Table

"This may change your mind about gefilte fish or open new culinary doors for you." —Dixie D. Vereen, The Washington Post

"Sometimes all it takes is one recipe to justify a new cookbook. The chicken soup in The Gefilte Manifesto uses chicken parts that you brown before making the soup, something I have never done. But it works, enhancing depth and color in the broth." —Florence Fabricant, The New York Times

"Borscht and gefilte fish are back, reprised as haute fare in this era of DIY style and old-timey authenticity. In a new cookbook of Ashkenazi food, Jeffrey Yoskowitz and Liz Alpern recast these and other humble, much-maligned specimens of Old World cuisine as the unlikely stars of a culinary movement." —Adam Chandler, The Atlantic

"A lively collection of Ashkenazi standards — some with a twist and others left to wander back to the old country." —Leanne Italie, Associated Press

"From the minute I opened up The Gefilte Manifesto, a Flatiron Books publication, I realized that Yoskowitz and Alpern had struck gold, taking on traditional favorites and blowing them out of the water in a hip and trendy culinary renaissance." —Sandy Eller, The Jewish Press

"Each recipe is not just a recipe but a story, a nugget, a web that connects us to our past and hopes to send us into the future." —Johanna Ginsberg, New Jersey Jewish News

"In the pages of this beautifully written, accessible cookbook, Alpern and Yoskowitz recover and reinvent Eastern European Jewish classics and add a bunch of recipes that likely would have baffled their great-grandparents. Thus there are instructions — and gorgeous photographs — for sour dills, bagels and home-cured pastrami, and yes, gefilte fish three ways. Right alongside these classics are recipes for making Ashkenazi kimchi, root vegetable latkes and dark chocolate and roasted beet ice cream." —Bari Weiss, NY1

"Gefilte gets an A on holiday taste test." —Alix Wall, The Forward