The Race to Save the Lord God Bird (Paperback) 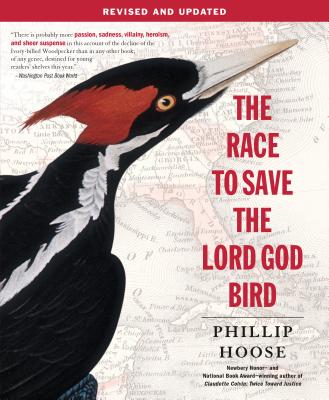 By Phillip Hoose
Email or call for price

The tragedy of extinction is explained through the dramatic story of a legendary bird, the Ivory-billed Woodpecker, and of those who tried to possess it, paint it, shoot it, sell it, and, in a last-ditch effort, save it. A powerful saga that sweeps through two hundred years of history, it introduces artists like John James Audubon, bird collectors like William Brewster, and finally a new breed of scientist in Cornell's Arthur A. "Doc" Allen and his young ornithology student, James Tanner, whose quest to save the Ivory-bill culminates in one of the first great conservation showdowns in U.S. history, an early round in what is now a worldwide effort to save species. As hope for the Ivory-bill fades in the United States, the bird is last spotted in Cuba in 1987, and Cuban scientists join in the race to save it.

All this, plus Mr. Hoose's wonderful story-telling skills, comes together to give us what David Allen Sibley, author of The Sibley Guide to Birds calls "the most thorough and readable account to date of the personalities, fashions, economics, and politics that combined to bring about the demise of the Ivory-billed Woodpecker."

The Race to Save the Lord God Bird is the winner of the 2005 Boston Globe - Horn Book Award for Nonfiction and the 2005 Bank Street - Flora Stieglitz Award.

This new edition of the author's award-winning history features a new chapter about the endlessly debated 2004 Arkansas "rediscovery" of the ivory-billed woodpecker that made headlines around the world, as well as an expanded introduction and more than a dozen new images.

Phillip Hoose is an award-winning author of books, essays, stories, songs and articles. Although he first wrote for adults, he turned his attention to children and young adults in part to keep up with his own daughters. His book Claudette Colvin won a National Book Award and was dubbed a Publisher's Weekly Best Book of 2009. He is also the author of Hey, Little Ant, co-authored by his daughter, Hannah; It’s Our World, Too!; The Race to Save the Lord God Bird; The Boys Who Challenged Hitler; and We Were There, Too!, a National Book Award finalist. He has received a Jane Addams Children’s Book Award, a Christopher Award, a Boston Globe-Horn Book Award, and multiple Robert F. Sibert Honor Awards, among numerous honors. He was born in South Bend, Indiana, and grew up in the towns of South Bend, Angola, and Speedway, Indiana. He was educated at Indiana University and the Yale School of Forestry. He lives in Portland, Maine.

“With power and humor, rage and sorrow, the narrative details the demise of the Lord God bird, braiding into its tale the stories of those who came into contact with it, from J.J. Audubon himself to James Tanner...Sidebars add engrossing details, and extensive back matter bespeaks exemplary nonfiction. But it's the author's passion that compels. Outstanding in every way.” —Starred, Kirkus Reviews

“In a thoroughly researched account based on interviews, primary materials, and published sources, Hoose tells how naturalists...raised, too late, awareness of the Ivory-bill's plight. Illustrated with archival photos and well provided with side bars, "important dates," maps, glossary, and index, this important summary of an environmental tragedy belongs in every library.” —The Horn Book

“This meticulously researched labor of love uses drama, suspense, and mystery to tell the story of the Ivory-billed Woodpecker...Hoose skillfully introduces each individual involved through interesting, historically accurate scenes. The author's passion for his subject and high standards for excellence result in readable, compelling nonfiction.” —Starred, School Library Journal

“The combination of the best of storytelling supported by extensive research...a must for any library serving youth or teachers.” —VOYA

“A compelling tale...readers will sense the urgency that remains, even if the Ivory-bill is gone.” —Publishers Weekly

“Hoose is a gifted storyteller. An engrossing story.” —The Bulletin of the Center for Children's Books