Poisoner in Chief: Sidney Gottlieb and the CIA Search for Mind Control (Hardcover) 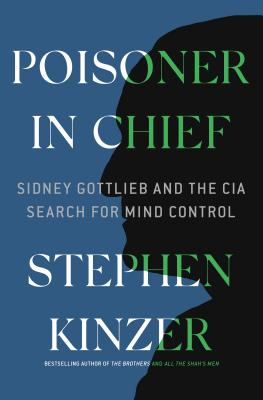 The bestselling author of All the Shah’s Men and The Brothers tells the astonishing story of the man who oversaw the CIA’s secret drug and mind-control experiments of the 1950s and ’60s.

The visionary chemist Sidney Gottlieb was the CIA’s master magician and gentlehearted torturer—the agency’s “poisoner in chief.” As head of the MK-ULTRA mind control project, he directed brutal experiments at secret prisons on three continents. He made pills, powders, and potions that could kill or maim without a trace—including some intended for Fidel Castro and other foreign leaders. He paid prostitutes to lure clients to CIA-run bordellos, where they were secretly dosed with mind-altering drugs. His experiments spread LSD across the United States, making him a hidden godfather of the 1960s counterculture. For years he was the chief supplier of spy tools used by CIA officers around the world.

Stephen Kinzer, author of groundbreaking books about U.S. clandestine operations, draws on new documentary research and original interviews to bring to life one of the most powerful unknown Americans of the twentieth century. Gottlieb’s reckless experiments on “expendable” human subjects destroyed many lives, yet he considered himself deeply spiritual. He lived in a remote cabin without running water, meditated, and rose before dawn to milk his goats.

During his twenty-two years at the CIA, Gottlieb worked in the deepest secrecy. Only since his death has it become possible to piece together his astonishing career at the intersection of extreme science and covert action. Poisoner in Chief reveals him as a clandestine conjurer on an epic scale.

Stephen Kinzer is the author of many books, including The True Flag, The Brothers, Overthrow, and All the Shah’s Men. An award-winning foreign correspondent, he served as the New York Times bureau chief in Nicaragua, Germany, and Turkey. He is a senior fellow at the Watson Institute for International and Public Affairs at Brown University, and writes a world affairs column for the Boston Globe. He lives in Boston.

“Winding through the spy-loving Eisenhower-Kennedy years, Kinzer’s book is a Tarantino movie yet to be made: it has the right combination of sick humor, pointless violence, weird tabloid characters, and sheer American waste. It is also frightening to read . . . [and] compelling, not least in the way it illustrates how the law of unintended consequences in covert action can work with an almost delirious vengeance.” —Adam Gopnik, The New Yorker

“Absolutely riveting. Stephen Kinzer’s Poisoner in Chief reads like a spy thriller—but his revelations about the macabre career of the CIA’s Sidney Gottlieb are deeply disturbing. Kinzer’s work underscores once again the narrative power of biography to unearth our collective history.” —Kai Bird, Pulitzer Prize-winning coauthor of American Prometheus, author of The Good Spy, and executive director of the Leon Levy Center for Biography

“Stephen Kinzer has done a great public service with this absorbing and informative portrait of the life and career of Sidney Gottlieb, a CIA scientist who was the Agency’s Dr. No in the Cold War—a producer of poison pills, poison darts, and leader of the hunt for the perfect killing machine, a la the Manchurian Candidate. It’s all in the bone-crunching detail, and Kinzer, a master of American perfidy, has done it again.” —Seymour M. Hersh, author of Chain of Command: The Road from 9/11 to Abu Ghraib and Reporter: A Memoir

"Kinzer’s retelling of the MK-ULTRA story is unsparing in its gruesome details, but not overwrought . . . Gottlieb has previously been treated as a historical footnote, but Kinzer elevates him to his proper place as one of the C.I.A.’s most influential and despicable characters." —Sharon Weinberger, The New York Times

"Poisoner in Chief is a biography of Dostoyevskian proportions. Gottlieb emerges as a tortured soul, penned in by personal compunction and a twisted sense of patriotism." —Los Angeles Review of Books

“A stranger-than-fiction account of the CIA’s efforts in the 1950s, ’60s, and ’70s at developing mind control and chemical-based espionage methods, and the chemist, Sidney Gottlieb, who spearheaded the effort . . . The nigh-unbelievable efforts he led are vividly and horrifically recreated in this fascinating history.” —Publishers Weekly

"It's an awful story, told fast and well . . . Kinzer has put together a revolting look at the champions of freedom in the USA." —San Francisco Review of Books

"A bustling narrative that sets MK-Ultra in its institutional framework of federal government, the military and the intelligence services, swerving all the while between madcap farce and grim atrocity." —Mike Jay, London Review of Books

"He’s been called Dr. Death, Washington’s 'official poisoner,' and a mad scientist. But Sidney Gottlieb never became a household name . . . Now, pulling together a trove of existing research, newly unearthed documents, and fresh interviews, Kinzer puts the fetid corpus of American Empire back under a microscope. It isn’t pretty—but it is instructive." —Kelley Beaucar Vlahos, The American Conservative

"The most powerful and important organs in the invisible government are the nation’s bloated and unaccountable intelligence agencies . . . The best window we have into this shadow world comes with historical accounts of its crimes, including those in Stephen Kinzer’s new book, Poisoner in Chief: Sidney Gottlieb and the CIA Search for Mind Control." —Chris Hedges, Truthdig

"Stephen Kinzer tells the story of Gottlieb, a chemist obsessed with finding a way to control the human brain, no matter how many innocent minds he destroyed in the process." —Larry Getlen, New York Post

“Stephen Kinzer takes the unusual approach of making Sidney Gottlieb, MK-Ultra’s program manager, the central figure of the story . . . Reflecting on Gottlieb’s culpability, Mr. Kinzer is careful to place his story in historical context . . . The reader will have to decide how far to venture into this dark thicket.” —The Wall Street Journal

"Stephen Kinzer has written books about civil wars, terror attacks, and bloodycoups, but his latest might be his most alarming. . . . Though the events recounted in Kinzer’s Poisoner in Chief: Sidney Gottlieb and the CIA Search for Mind Control took place a half-century ago, they’re scandalous in a way that transcends time." —The Daily Beast