The Shape of Water (Hardcover) 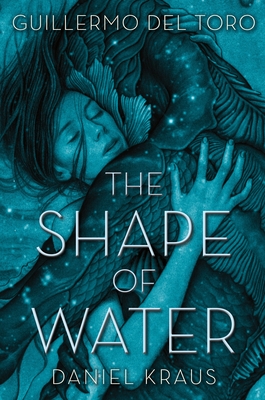 The 2018 Academy Award's Best Picture of the Year and New York Times-bestselling novel, The Shape of Water.

"[A] phenomenally enrapturing and reverberating work of art in its own right...[that] vividly illuminates the minds of the characters, greatly enhancing our understanding of their temperaments and predicaments and providing more expansive and involving story lines." —Booklist

It is 1962, and Elisa Esposito—mute her whole life, orphaned as a child—is struggling with her humdrum existence as a janitor working the graveyard shift at Baltimore’s Occam Aerospace Research Center. Were it not for Zelda, a protective coworker, and Giles, her loving neighbor, she doesn’t know how she’d make it through the day.

Then, one fateful night, she sees something she was never meant to see, the Center’s most sensitive asset ever: an amphibious man, captured in the Amazon, to be studied for Cold War advancements. The creature is terrifying but also magnificent, capable of language and of understanding emotions…and Elisa can’t keep away. Using sign language, the two learn to communicate. Soon, affection turns into love, and the creature becomes Elisa’s sole reason to live.

But outside forces are pressing in. Richard Strickland, the obsessed soldier who tracked the asset through the Amazon, wants nothing more than to dissect it before the Russians get a chance to steal it. Elisa has no choice but to risk everything to save her beloved. With the help of Zelda and Giles, Elisa hatches a plan to break out the creature. But Strickland is on to them. And the Russians are, indeed, coming.

Developed from the ground up as a bold two-tiered release—one story interpreted by two artists in the independent mediums of literature and film—The Shape of Water is unlike anything you’ve ever read or seen.

“Most movie novelizations do little more than write down what audiences see on the screen. But the novel that’s accompanying Guillermo del Toro’s new movie The Shape of Water is no mere adaptation. Co-author Daniel Kraus’ book and the film tell the same story, of a mute woman who falls in love with an imprisoned and equally mute creature, in two very different ways.” —io9

Praise for The Shape of Water directed by Guillermo del Toro

Winner of the 2018 Academy Award for Best Picture

Winner of the 2018 Academy Award for Best Director

Winner of the 2018 Academy Award for Music (Original Score)

Winner of the 2018 Academy Award for Production Design

"With encouragement from critics and awards voters, discerning viewers should make Fox Searchlight’s December release the season’s classiest date movie—for perhaps the greatest of The Shape of Water’s many surprises is how extravagantly romantic it is.” —Variety

"A visually and emotionally ravishing fantasy that should find a welcome embrace from audiences starved for imaginative escape.” —The Hollywood Reporter

Guillermo del Toro is the award-winning director of numerous critically acclaimed feature films, such as Pan's Labyrinth, Hellboy, Pacific Rim, and The Shape of Water (Oscar Award winner, Best Picture). He is also the co-author (with Chuck Hogan) of the bestselling Strain Trilogy. Del Toro lives in California with his wife and two children.

Daniel Kraus is the author of numerous novels, including Rotters, The Death and Life of Zebulon Finch duology, Bent Heavens, and the Teddies Saga. With Guillermo del Toro, he wrote the New York Times-bestselling The Shape of Water and Trollhunters (the inspiration for the Netflix series). His novels have been Odyssey Award winners, Library Guild selections, YALSA Best Fiction for Young Adults picks, Parent’s Choice Gold Award winners, Bram Stoker finalists, and more. He lives with his wife in Chicago.

"[A] phenomenally enrapturing and reverberating work of art in its own right...[that] vividly illuminates the minds of the characters, greatly enhancing our understanding of their temperaments and predicaments and providing more expansive and involving story lines. The dynamic between the movie and the novel is vital and fascinating, and people will be eager to talk about what each version has in common and how they diverge." --Booklist