Fire and Fury: Inside the Trump White House (Paperback) 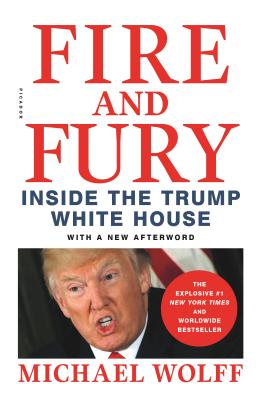 With extraordinary access to the West Wing, Michael Wolff reveals what happened behind-the-scenes in the first nine months of the most controversial presidency of our time in Fire and Fury: Inside the Trump White House.

Since Donald Trump was sworn in as the 45th President of the United States, the country—and the world—has witnessed a stormy, outrageous, and absolutely mesmerizing presidential term that reflects the volatility and fierceness of the man elected Commander-in-Chief.

This riveting and explosive account of Trump’s administration provides a wealth of new details about the chaos in the Oval Office, including:
-- What President Trump’s staff really thinks of him
-- What inspired Trump to claim he was wire-tapped by President Obama
-- Why FBI director James Comey was really fired
-- Why chief strategist Steve Bannon and Trump’s son-in-law Jared Kushner couldn’t be in the same room
-- Who is really directing the Trump administration’s strategy in the wake of Bannon’s firing
-- What the secret to communicating with Trump is
-- What the Trump administration has in common with the movie The Producers

Never before in history has a presidency so divided the American people. Brilliantly reported and astoundingly fresh, Fire and Fury shows us how and why Donald Trump has become the king of discord and disunion.

“Not since Harry Potter has a new book caught fire in this way…[Fire and Fury] is indeed a significant achievement, which deserves much of the attention it has received.”—The Economist

Michael Wolff is the author of several books about the Trump White House, Fire and Fury, Siege, and Landslide. His other books include a biography of Rupert Murdoch, The Man Who Owns the News, and his memoir of the early internet years, Burn Rate. He has been a regular columnist for New York magazine, Vanity Fair, British GQ, the Hollywood Reporter, and the Guardian. The winner of two National Magazine Awards, he lives in New York City with his family.

Named a Best Book of the Year by The Guardian, Kirkus Reviews, The Sunday Times, The Observer, and Financial Times

"What makes Fire and Fury important is that it is not just about Trump, but a product of the same culture that produced Trump: It is 'reality' journalism, in the same way that Trump is a 'reality' character." —The Atlantic

"It is not a book. It is the book. If there is only one book Washington political reporters will read this year...then this is it.... [Wolff] is a wicked stylist and keen observer, with a justly earned reputation for approaching his subjects with fangs bared and talons sharpened.... A perfect karmic delivery system."—The Weekly Standard

"The pages of Wolff’s book are littered with insults and intrigue, backstabbing and dysfunction."—The Washington Post

"To the many ironies of Donald Trump’s presidency can be added the fact that a man who does not read books has helped cause a publishing sensation.... Mr Wolff’s muckraking skills, cattiness, cynicism and feel for human weakness, especially among the rich and famous, make him well-qualified for the job."—The Economist

"An undeniably juicy chronicle of a presidential administration that in just one year has been beset by numerous scandals and crises.... [Wolff] gives the reader a you-are-there sense of events without resorting to an unneeded dramatic writing style." —The San Francisco Chronicle


"Wolff’s lasting achievement here is not his headline-grabbing revelations but the skillful, enthralling, and utterly terrifying way he depicts the unqualified, unprepared, and downright unusual characters to be found wandering the halls of the White House in the first half of 2017 as well as their near bloodsport-level conflicts." —Entertainment Weekly

"What makes the book significant is its sly, hilarious portrait of a hollow man, into the black hole of whose needy, greedy ego the whole world has virtually vanished."—The Guardian

"The White House has naturally denied and decried Wolff's account, but even if it's only halfway accurate, it presents an appalling view of a frighteningly unqualified and unprepared gang that can't think straight."—Kirkus Reviews