Home in the World: A Memoir (Paperback) 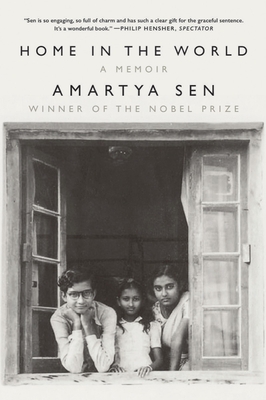 A towering figure in the field of economics, Amartya Sen is perhaps best known for his work on poverty and famine, as inspired by events in his boyhood home of West Bengal, India. But Sen has, in fact, called many places “home,” from Dhaka in modern Bangladesh to Trinity College, Cambridge. In Home in the World, these “homes” collectively form an unparalleled and profoundly truthful vision of twentieth- and twenty-first century life. Interweaving scenes from his youth with candid reflections on wealth, welfare, and social justice, Sen shows how his life experiences—in Asia, Europe, and later America—vitally informed his work, culminating in the ultimate “portrait of a citizen of the world” (Philip Hensher, Spectator).

• “Sen is more than an economist, moral philosopher or even an academic. He is a life-long campaigner . . . for a more noble idea of home.” —Edward Luce, Financial Times (UK)

Amartya Sen is a professor of economics and philosophy at Harvard University. A former master of Trinity College, Cambridge, he won the Nobel Prize for Economics in 1998. His many celebrated books include Development as Freedom and The Idea of Justice.

Stirred in with Mr. Sen’s memories, which are bright in their detail and freshness, are meditations of various sorts: on the balance-sheet of British rule in India; on the importance of classical languages in a young person’s education; on the philosophical disagreements (of which there were many) between Mahatma Gandhi and the poet Rabindranath Tagore (like Mr. Sen, a Nobel laureate and Bengali); on the ghastly Bengal famine of 1943, which killed three million people; and on the differences between Britain and the U.S. in their respective approaches to an understanding of economics. . . . The most compelling chapters of Mr. Sen’s memoirs are... those that dwell lovingly—even languorously—on his childhood and schooling. . . . [Sen] is an unflinching man of science but also insistently humane. His many ardent admirers regard him as an economist for the downtrodden. How he arrived at his status of global progressive icon would make a compelling storyline for his next memoir.
— Tunku Varadarajan - Wall Street Journal

[A] graceful and hopeful book... [A] belief in shared humanity, and an attendant commitment to inclusiveness and tolerance, have been significant to Sen’s body of work, including his desire to connect abstract economic theories with real people and real problems... He joyfully recalls his undergraduate studies in Calcutta, where he spent hours in a local coffeehouse in intense conversation with classmates.... Sen is such a charming and engaging narrator that he makes recaps of quarrels over Keynesian economics appealing – not to mention understandable to laypeople.
— Barbara Spindel - Christian Science Monitor

Sen is so engaging, so full of charm and has such a clear gift for the graceful sentence. It’s a wonderful book, the portrait of a citizen of the world.
— Philip Hensher - The Spectator [UK]

Sen is more than an economist, a moral philosopher or even an academic. He is a life-long campaigner, through scholarship and activism, via friendships and the occasional enemy, for a more noble idea of home—and therefore of the world.
— Edward Luce - Financial Times

[A] moving, heartfelt memoir of his early life before and after Partition in Bengali India . . . Illuminating and wonderfully accessible as both an intimate coming-of-age tale and a crash course in economics.
— Kirkus Reviews, starred review

[A] quietly captivating memoir . . . [A] contemplative travelogue and a fascinating look into the singular consciousness of one of the world’s foremost thinkers . . . [A] galvanizing reflection on a roaming life.
— Publishers Weekly

A vivid memoir, recommended for those interested in the intersection of economics and social science.
— Caren Nichter - Library Journal

Charting diverse influences—Gandhi to Rabindranath Tagore to Wittgenstein to Adam Smith—Sen reiterates that his intellectual proclivities have always spilled beyond narrow disciplinary confines . . . his autobiography suggests an enduring commitment to intellectual work with social purpose.
— Booklist